US Open: Was Brian Harman lucky to avoid a penalty for doing THIS in the rough?

Sky Sports Golf commentators - and golf fans - react after seeing what Brian Harman did in the greenside rough on 13 on day two of the US Open. 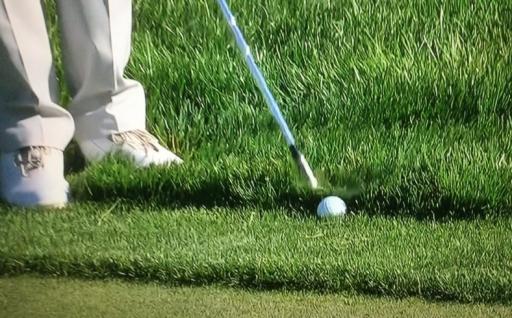 Sky Sports Golf commentators and golf fans on social media have been reacting after seeing Brian Harman appear to touch his golf ball with his wedge and possibly improve his lie while in the greenside rough on the 13th hole on day two of the US Open.

Harman, 35, had something of a mare on the par-4 13th when sending his approach shot over the back of the green.

He wedged his ball back across the other side of the green into the rough, and then sent his fourth shot behind the pin into the intermediate rough and up against the second cut of rough.

It was there where the particular talking point unfolded as Harman seemed to get a little aggressive with his wedge down behind the ball.

Harman, ranked 50th in the world, eventually chipped his ball onto the green and holed the putt for a double-bogey six.

It proved to be an expensive hole for Harman, who at the time was in a tie for the lead on 4-under par.

While difficult to see on the broadcast exactly what happened, it seems as though his ball only oscillated rather than moved off its axis.

Former US PGA champion and Sky Sports Golf commentator Rich Beem certainly had his doubts about the incident, as too did former European Tour pro and co-commentator Andrew Coltart.

"Rich, there's a bit of reaction going on to how Brian has set up to his shot over here on 13," said Coltart. "Look at this..."

Beem responded: "The ball never moves but the way that he takes that club and he pushes down on the grass. That ball is not sitting there, he's taking that club when he puts that club down, he's pushing down on it."

"Some people will need to take a look at that."

It is understood USGA rules officials did take a look at it and they have deemed there was no wrongdoing here and therefore no penalty.

But it's fair to say there are plenty of golf fans on social media right now who consider Harman did improve his lie on 13.

Harman bounced back from his double-bogey with a birdie at the very next hole to remain in contention for his maiden major title.

What do you make of the Harman incident? Watch here:

Brian Harman clearly causes his ball to move on 13 R2 @usopengolf why is this not a penalty ? @SkySportsGolf pic.twitter.com/eIOhBC86iK

@USGA why no penalty for Brian Harman? Clear breach of Rules.@SkySportsGolf

@ewenmurray77 why did Brian Harman not get penalty on 13th - he chipped from one fringe to the other and on the second chip to flag he addressed the ball twice it moved before he played the shot. Are they not fouls?