US Open: Will Zalatoris keeps up INCREDIBLE major championship form

Will Zalatoris is currently tied at the top of the US Open leaderboard with one round remaining, which comes as no surprise with his impressive major record. 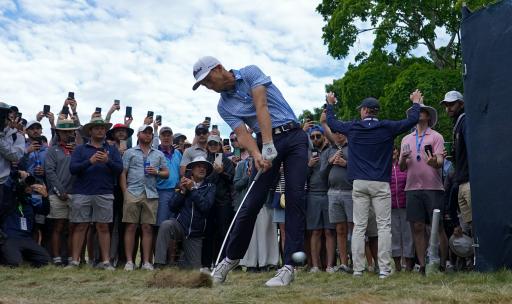 It is now becoming an expectation to see Will Zalatoris at the top of the leaderboard at major championships after another impressive display in the third round of the US Open.

As the big names such as Collin Morikawa, Scottie Scheffler, Jon Rahm and Rory McIlroy experienced ups and downs on Saturday in Brookline, Zalatoris slowly crept up the leaderboard.

Morikawa, Scheffler and Rahm all made double-bogeys at one stage as they tussled for a position at The Country Club in Brookline.

Meanwhile, the 25-year-old made a solitary bogey on the par-4 7th hole and eliminated this with four birdies on the day. Unlike his competitors, he avoided gross errors in a windy, brutal third round in Boston.

Related: US Open R3: Matt Fitzpatrick and Will Zalatoris lead Jon Rahm by one

These statistics show Zalatoris gets his ball round very well. His strong tee-to-green game worked perfectly and it helped him achieve a share of the lead on 4-under with Matt Fitzpatrick heading into Sunday.

"I just kept doing what I was doing all day. I didn't have a plan of firing at pins or being aggressive. I knew it was going to play hard and just needed to stay patient," Zalatoris said after his 67 on Saturday.

"I knew if I make an early bogey or two, don't change the game plan, don't try to get extra aggressive because that's how you make a mess of it.

"So, obviously, pretty pleased to be moving up the board on moving day, but just kind of one of those days where the process added up to a good result."

The man from San Francisco is maintaining his incredible record in major championships. Barring a final-round collapse, he is set to make his fifth top-10 in just eight major starts.

As we know, he agonisingly lost to Justin Thomas in a playoff at this year's US PGA Championship and he came runner-up to Hideki Matsuyama on his debut at The Masters in 2021.

In terms of breaking his duck on the PGA Tour, Zalatoris also lost in a playoff to Luke List at the Farmers Insurance Open earlier this season. His maiden victory is just round the corner.

Next Page: Report: LIV Golf players will be prevented from playing Scottish Open