US Open: Viktor Hovland plays last 11 holes in 9-OVER to miss cut

Viktor Hovland's struggles continue on day two at the US Open. 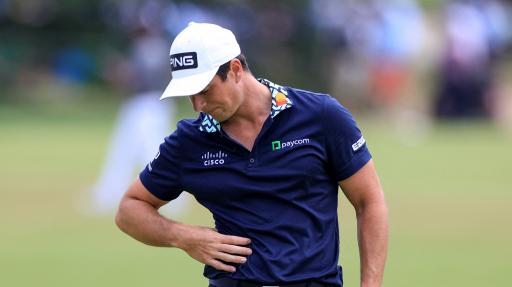 Viktor Hovland started the day on level par - on top of a rumoured link away from the PGA Tour to LIV Golf - and he ended it by missing the cut at the US Open after playing his last 11 holes in 9-over par.

Hovland, 24, started his second round brightly with back-to-back birdies on the 12th and 13th, his third and fourth holes of the day, but then things really escalated badly for the Norwegian who is now without a top-20 finish in his last five starts on Tour.

The three-time PGA Tour winner ended his front nine with two consecutive bogeys at 17 and 18, and then made the turn with four more bogeys in a row to the 4th.

Hovland, now eighth in the Official World Golf Rankings, made a par at the short par-4 5th before making another bogey at the 6th and two more to finish on 8 and 9.

It all added up to a round of 7-over 77 and a missed cut at Brookline.

The cut is likely to fall at 3-over par at the time of this report.

Hovland has now played in 11 major championships and still not yet achieved a top-10 finish.

His best finish in a major championship is tied 12th, something he achieved as the low amateur at the 2019 US Open and then as a pro at the 2021 Open Championship.

Hovland has made an immediate rise in the game of golf with three PGA Tour victories and two wins on the DP World Tour since the start of 2020.

Phil Mickelson also missed the cut with rounds of 78 and 73 to finish 11-over par.