All the talk might be about Brooks Koepka, Rory McIlroy and Tiger Woods heading into the US Open, but Dustin Johnson is the man everyone needs to worry about, writes Will Trinkwon... 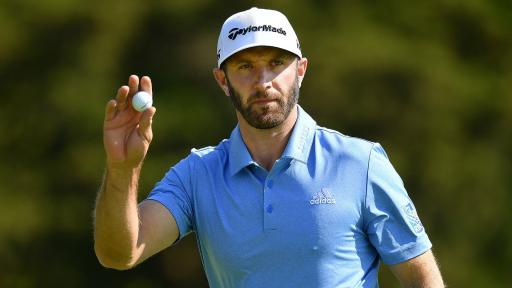 A resurgent Tiger Woods, four-in-eight major machine Brooks Koepka and last week's runaway train Rory McIlroy might be all the talk of Pebble Beach heading into the 119th US Open, but it's course specialist and joint-favourite Dustin Johnson that everyone needs to worry about, writes Will Trinkwon.

Fresh off of conquering the world’s best at Bethpage Black for his fourth major title in his last eight major starts, Koepka headlines the betting as he goes in search of landing a US Open threepeat - something only ever achieved by one other player, Willie Anderson in 1905.

While I fully respect what Koepka has done in the game recently, he looked a little out of sorts in Canada last week and let's be honest, he can't keep winning majors no matter what he says. I'm more than prepared to look past his 8/1 price tag this week.

McIlroy has vaulted from 14s into 8s in a matter of days following his demolition display in the final round of the Canadian Open where he flirted with a 59 en route to a seven-stroke romp.

It's great to see Rory back to form, but let's not forget he won The Players Championship in March before going on to disappoint in his next start at The Masters.

He also has very little course knowledge of Pebble Beach, and I think that could prove a major thorn in his side this week, so again, he's another one of the favourites I'm prepared to overlook.

A certain Eldrick Tont Woods also can’t help but be a part of the equation following his memorable Masters triumph in April followed by a ninth at the Memorial Tournament recently where he closed with a 67.

Woods’ last two performances at a US Open at Pebble Beach have resulted in a tie for fourth and a win, the latter by a record 15 strokes. While it would be foolish to overlook the 15-time major champion's challenge this week, especially on his form here from 2000, through gritted teeth I am.

So to my pick for the title in co-favourite Dustin Johnson - a Pebble Beach specialist who I predict is going to come good and land his second US Open title, which would incredibly be only his second career major.

Yes, the price isn't going to help pay off your mortgage but his combination of form, US Open know-how and proven ability to win, the big-hitting American is my clear pick for golf's third major of the year.

DJ’s record around Pebble Beach speaks for itself. With the exception of Tiger (and maybe Phil Mickelson), no modern player has a better relationship with the links than Dustin.

The AT&T National Pro-Am, which is held at the course every year, has twice sat atop DJ’s mantlepiece. In 2009, he romped home by four shots over David Duval, and then, just to underline the achievement, successfully defended the title a year later.

A year later, Johnson led the US Open at Pebble Beach after 54 holes, but the pressure got to him and he blew out of contention with an 82 to narrowly finish inside the top 10.

Yes, a bad finish that will have potentially left some major scars, but DJ dispelled those myths when clinching his maiden major title at the 2016 US Open at Oakmont. He's also a bigger and better beast than he was nine years ago, and should he find himself in a leading position this time around, you would fully expect him to seal the deal.

Perhaps more importantly, DJ is also a golfer in form. While its true that his last win came several months ago at the WGC Mexico Championship, he’s been hanging around on the top page of leaderboards pretty much every time he's teed it up - reflected none better than finishing bridesmaid in the year's first two majors at The Masters behind Woods and US PGA Championship behind Koepka.

In the Masters, DJ finished strongly, but was just too far back after Saturday to challenge Woods. His performance in the US PGA was a little flakier, but anytime you’re going deep round the brawny Bethpage Black, you’ve got to be doing something right.

His strong showing at Bethpage augurs particularly well for the US Open, where a similar set of skills are likely to decide the champion. Like the Black Course, Pebble Beach will play tough, and crisp iron play and accuracy off the tee will be paramount. This should play into Dustin’s hands given he is regarded as one of the best all-round drivers of the ball alongside McIlroy and Koepka.

DJ currently ranks 17th in Greens in Regulation on the PGA Tour, and at Bethpage he ranked third in stroke gained: tee-to-green, and second in strokes gained: off-the-tee. Furthermore, Pebble’s hard-running fairways, combined with his length, mean Dustin will be able to amp up his accuracy even further by batting a number of fairway woods and long irons to keep him in play.

Dustin’s greatest asset, however, may be his famously unflappable temperament. Short of Mickelson, no modern player has had more disappointments in the majors than Johnson, but he remains a calm and even stoic figure, brushing off the let downs in his woozy South Carolina drawl.

Such chill is nowhere more valuable than at a US Open where the rough is high - portrayed perfectly by Patrick Cantlay earlier today - and bogies are almost inevitable. Those who rise to the USGA’s toughest test tend to be players who can maintain equanimity in the face of adversity, and keep their heads when the shots slip away. Few players can cope with this pressure cooker better than Dustin.

As Bethpage’s crowds’ shouts of ‘DJ, DJ, DJ’ at last month’s PGA showed, there would, should he emerge triumphant, be few more popular winners of the US Open this week than Dustin Johnson.

Forget about the other challengers. In April it was all about Tiger, May was the month of Brooks – look for June to be dominated by Dustin.