Will Zalatoris hits the front on day two of the PGA Championship at Southern Hills, as Tiger Woods limps his way into the weekend. 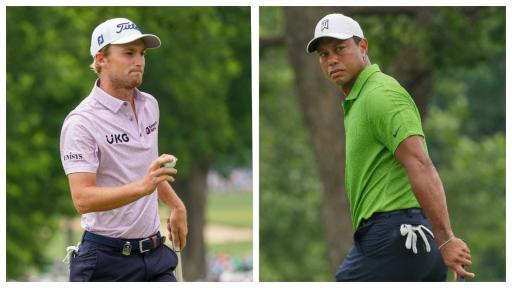 Will Zalatoris raced to the top of the leaderboard with a flawless 5-under 65 on day two of the PGA Championship.

The 25-year-old American moved to 9-under par to open up a narrow one-shot lead on Chile's Mito Pereira, who produced an equally impressive 6-under 64 in just his second major championship.

Should Zalatoris go on to win the PGA Championship on Sunday, he would join a group of just four players in the last 40 years to win their first title on the PGA Tour at a major championship.

Zalatoris has played in just six majors in his career thus far and he has finished in the top 10 four times.

Zalatoris, the World No.30, opened with a tap-in birdie on the par-4 1st and then made nine consecutive pars before draining three birdies in a row from the 11th hole all from within eight feet.

Zalatoris may tend to struggle with his short putts from time to time on the PGA Tour but he has looked remarkably impressive on the greens thus far by gaining more than six strokes on the field with the flatstick.

Justin Thomas posted a solid 3-under 67 in brutal windy conditions in the morning to progress to 6-under par for the tournament.

Thomas is bidding to win his second PGA Championship having won his sole major title back in 2017 at Quail Hollow.

Bubba Watson, a two-time Masters winner, fired a PGA Championship record-tying 63 to vault into fourth place on 5-under par.

Rory McIlroy failed to maintain his first-round form with a lacklustre 71 but the Northern Irishman remains in the hunt for his third PGA Championship and first major title since 2014 at 4-under par alongside Davis Riley and Abraham Ancer.

England's Matt Fitzpatrick crept into the top 10 with a 69 to bump himself up to 3-under par.

Despite clearly being in discomfort as he continues his rehabilitation process, Tiger Woods produced a valiant performance to make the halfway cut with a 1-under 69.

Woods found himself outside the cut mark at 5-over par when making a double-bogey on the par-3 11th but birdies at the 13th and 16th quickly erased that and the 15-time major champion lies at 3-over par heading into the weekend.

The former World No.1 has now recorded 101 rounds in the 60s in the majors.

Jordan Spieth can still achieve the career grand slam this week but the three-time major champion will need to fly on the weekend at 1-over par for the tournament, one shot better than four-time major champion Brooks Koepka and 2021 US Open champion Jon Rahm.

Plenty of big names missed the halfway cut, however, none more so than World No.1 Scottie Scheffler and former World No.1 Dustin Johnson on 6-over par.

Reigining FedEx Cup champion Patrick Cantlay also had a week to forget on 11-over par.

Next Page: Cameron Smith hits Aaron Wise on the head with his tee shot at PGA Championship