Rory McIlroy may have to wait a little longer for the elusive fifth major after a maddening day at Southern Hills. 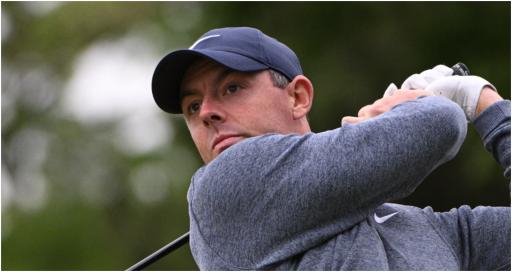 Rory McIlroy’s wait for the elusive fifth major may have to continue a little while longer after a devastating front nine at Southern Hills on Saturday damaged his PGA Championship prospects.

McIlroy, 33, began the day at 4-under par. And with Justin Thomas and Bubba Watson as the only other really experienced players inside the top-10 it presented a real opportunity to end the wait.

But what transpired in the afternoon in Oklahoma was the stuff of nightmares for McIlroy after he made a shocking triple bogey at No. 6 and followed that with two consecutive bogeys.

He birdied 9 but another triple followed at the par-3 11th after he sent his tee shot over the back of the green. When he did get the ball on the putting surface, three more putts followed.

The Northern Irishman showed some guts and determination to haul himself back on the right side of par by making birdies at 13, 14 and 16 but dropped another shot at 18 to drop back to level par.

McIlroy held the 18-hole lead after racing to 5-under par. Golf fans and pundits suggested this was the time he ended the seven-year drought but he’ll need another Masters Sunday to get it done.

All the stats seemed to suggest something had shifted in favour of McIlroy but again it looks as if the real problem is between his ears. He’ll also need the leaders to make mistakes to stand a chance.

By day’s end, it was Chile’s Mito Pereira (69) who held the 54-hole lead, three strokes ahead of Will Zalatoris (67) and England’s Matthew Fitzpatrick (67). Cameron Young (67), is a further shot back.

Fitzpatrick, who holed out on the bunker on No. 5, has his best opportunity to win a major since the 2018 U.S. Open. “This is my first time ever in proper contention,” Fitzpatrick said.

The Englishman admitted that he had changed his 4-iron ahead of the round and flushed it all day, including a superb iron shot into 18 which led to a birdie. “Looking forward to tomorrow,” he added of his final group pairing.

Abraham Ancer (70), at 4-under, is by no means out of it. Justin Thomas (74), again tried to plot his way around with Bones but like McIlroy might need divine intervention to claim his second major.

Two-time Masters champion Bubba Watson, 46, is the surprise package this week. He tied the course record in the second round and was looking good until a poor finish to his back nine.

Watson, who could perhaps soon be departing for the Saudi-backed LIV Golf Invitational Series, dropped four shots in his last five holes to find himself on the same score as Thomas.

Earlier, in the morning Tiger Woods provided a sobering moment. He carded a 9-over par 79 which saw him tie for joint last. A sore Woods, 46, hinted at a possible withdrawal.

Seamus Power, Stewart Cink, Webb Simpson, Lucas Herbert and Max Homa round off the top-10 going into what promises to be a sensational Sunday at the 104th PGA Championship.

Next page: Pro makes all-time bogey from the sand after golf rule change