Golf fans BEMUSED by Tony Finau's quote at the US PGA

Tony Finau believes he is one of "only a certain amount of guys that actually believe they can win a major." 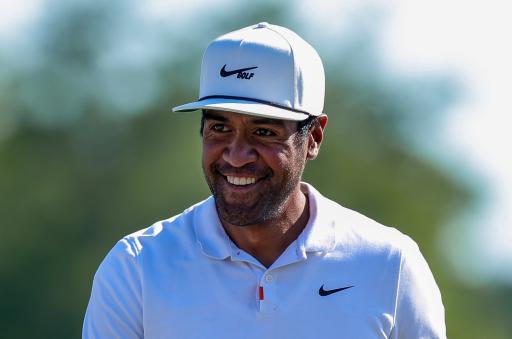 You certainly have to admire Tony Finau's confidence heading into this week's US PGA Championship at Kiawah Island, but at the same time when you have just one PGA Tour title in 180 starts, you sort of feel like he might be getting a little ahead of himself.

Finau may have accumulated a whopping $22 million in his PGA Tour career so far, but he has failed on numerous occasions the past four and half years to add a second career win to his lone 2016 Puerto Rico Open triumph.

Over the past two years on the PGA Tour, the big-hitting American has ranked outside the top 100 when it comes to final round scoring average (both over 70), reflecting his difficulty to see things out on a Sunday.

But with eight top 10s in his past 12 majors in the locker heading to Kiawah Island this week and some decent results so far on the PGA Tour in 2021, Finau is understandably in buoyant mood as he bids to land his first career major.

So much so - in almost similar brash confidence to his compatriot Brooks Koepka when it comes to major tournaments - Finau believes he is one of only a handful of guys on the PGA Tour that even believe they can win one of golf's four majors.

"I think there's only a certain amount of guys that actually believe they can win (a major) like deep down," said Finau during his pre-tournament press conference.

It's fair to say Finau's words have certainly ruffled the feathers of golf fans this week, especially among those that question whether he really does have what it takes to win a major given his final-round difficulties in PGA Tour events, let alone major championships.

"Golf was better when players accomplished something and didn't just talk about it."

"Great to have the belief you can win a major, but at the same time, you have got to start backing it up. We've yet to see Finau see out an event in nearly five years now. He could have won six tournaments since then and has thrown them all away."

"Tony can't win period, but yeah, might as well manifest it at a major."

"He lost me at the word think."

"Think isn't good enough. You need to know and believe you WILL win a major."

Do you think Tony Finau has what it takes to win a major? When do you think he will win another PGA Tour event? Share your thoughts and comments on our social media channels or head over to our YouTube channel to watch our US PGA preview and win yourself some brand new Jordan Spieth golf shoes!