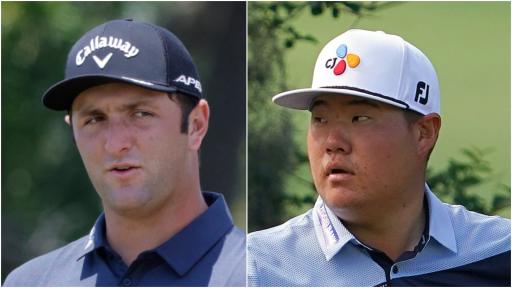 Jon Rahm admits he is "open for bribing" should military service end up being on the line for South Korea's Sungjae Im during the Olympic Men's Golf Tournament at the Summer Games in Tokyo.

South Korea mandates men between the ages of 18 and 28 to serve two years in its military, just as two-time PGA Tour winner Sangmoon Bae had to do from 2015 and 2017.

The only exemption to military service, however, is earning a gold, silver or bronze medal at the Olympics, or a gold medal at the Asian Games, the latter of which is open to amateurs.

Rahm, 26, was quizzed by the media ahead of this week's US PGA Championship at Kiawah Island as to what he made of Im needing a medal at the Olympics this summer in order to avoid military service.

At first, the Spaniard was none the wiser.

"Well, I would say if we're fighting for fourth and third place, I'm open for bribing if he needs me to make a three-putt on the last hole.

Rahm, who like Im is bidding to land his maiden major at the US PGA this week, added: "I feel for him that those are the two choices, either win a medal or go military service, because even if you end up in the nicest branch of the military it's stll one or two years he can't play golf. That's a big setback."

Im, who won the 2020 Honda Classic on the PGA Tour, currently finds himself 12th in the Official World Golf Rankings.

Social media was quick to react to Rahm's comments about "bribery" with one golf fan saying: "Let's just hope Sungjae Im isn't relying on Matt Kuchar taking three putts on the 18th for a bronze medal."

Former Players Championship winner Si Woo Kim also finds himself in the same position as Im heading into the Olympics.

Last week's PGA Tour winner KH Lee is exempt from military service as he bagged a team gold medal at the 2010 Asian Games.

NEXT PAGE: GOLF FANS REACT TO TONY FINAU'S VERY STRANGE COMMENT AT THE US PGA