Justin Thomas won his second US PGA Championship at Southern Hills, coming back from seven shots behind to beat Will Zalatoris in a 3-hole aggregate playoff. 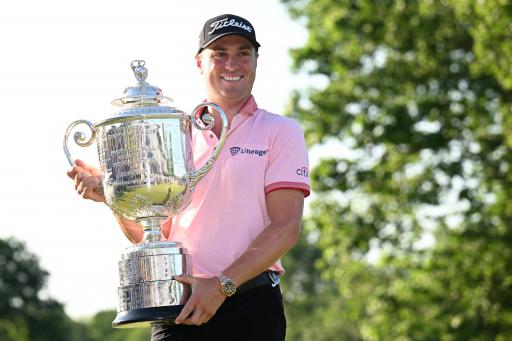 Justin Thomas won his second US PGA Championship title after beating Will Zalatoris in a dramatic playoff at Southern Hills.

Thomas came back from seven shots behind on the final day in Tulsa which equals the largest final-round comeback at the tournament since John Mahaffey in 1978.

The two-time major champion has now won four of his six playoff appearances on the PGA Tour and has earned his first win since The Players Championship in 2021.

As for Zalatoris, he is still in search of his first PGA Tour win. Both players finished one shot ahead of Cameron Young and Mito Pereira. Pereira missed out on the playoff after making a heartbreaking double-bogey on the 72nd hole.

Pereira and Matthew Fitzpatrick were in the final group of the day, but the first move was made by Zalatoris. After birdies on the 4th and 5th holes, the 25-year-old co-led on 8-under-par with the Chilean.

So clutch from JT. pic.twitter.com/zNaUb7m9VW

On this 218-yard par-3, Zalatoris hit his tee shot into the bushes long and right of the hole. He took a drop and after taking 15 minutes to play the hole, he rolled in an eight-footer for the bogey.

The 2021 Rookie of the Year bogeyed the 7th hole as well, but cracks began to emerge in the leader too. Pereira bogeyed the 7th and 8th holes to fall back to 7-under-par.

With the back nine remaining of the US PGA, Pereira led by one shot from Zalatoris, Young and he was two shots ahead of Fitzpatrick.

Unfortunately for the Englishman, he bogeyed the 10th and 11th holes and suddenly, he was four shots adrift in Oklahoma. Meanwhile, Pereira made huge par saves on holes 10 and 11 to keep his narrow advantage.

2017 PGA champion Thomas began the day seven shots behind and although he played his front nine in level par, he slowly made progress.

"It's just in time again at the PGA Championship."
Justin Thomas wins The Wanamaker Trophy for the second time! pic.twitter.com/2gTDXm7kRB

Thomas made back-to-back birdies on the 11th and 12th holes to reach 4-under-par. He was now within two shots of Pereira and Young who co-led on 6-under-par with Pereira bogeying the 12th hole.

Pereira found a crucial birdie on the 13th hole but gave one back on 14 too. Things were very close but Pereira still led by one with three holes left from Zalatoris and now Thomas, who birdied his 71st hole.

All seemed lost for Fitzpatrick but he found hope with a superb chip-in for birdie on the 15th hole. He was just two shots behind with three holes remaining.

Thomas had a golden opportunity to reach 6-under-par on the 18th hole, but could only manage a par. His 67 made him the leader in the clubhouse, level with Zalatoris on 5-under-par too.

Needing a par on the final hole to seal the deal, Pereira swiped his tee shot into the right-hand water hazard. He made an agonising double-bogey to miss out on a playoff.

Both Thomas and Zalatoris birdied the par-5 13th which was the first of the 3-hole aggregate playoff. They took on the 17th hole next and Thomas edged ahead with a tap-in birdie after Zalatoris missed his short birdie attempt.

After Zalatoris failed to birdie the 18th and final playoff hole, Thomas was left with two putts for the tournament and he used them.