Will Zalatoris hit his tee shot on the par-3 6th hole into a bush and after much deliberation with the rules official, he chipped from a path. 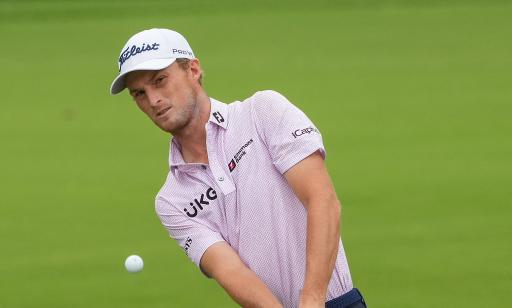 Will Zalatoris made an incredible bogey on the par-3 6th hole in the final round of the PGA Championship, trying to keep in touch with Mito Pereira.

The 2021 Rookie of the Year took over 15 minutes to play the 218-yard hole as when he hit his tee shot, he found the bushes right and long of the green.

Zalatoris deliberated with the rules official for a lengthy period. The 25-year-old eventually took a drop on the cart path for one penalty stroke.

Looking for his first win on the PGA Tour and his first major win, Zalatoris skipped his ball off the hard surface, something we all wish we were capable of.

One of the best bogeys you will ever see from Will Zalatoris. pic.twitter.com/IaUZgrDjzD

He hit his 30-yard chip to eight feet. Under immense pressure and at risk of falling three shots behind the leader Pereira, the World No.30 rolled in the putt.

He fell back to 7-under-par and at this stage, he was two shots behind the Chilean leader who is only making his second appearance at a major championship.

In five previous appearances at major events, Zalatoris has made three top-10's. At the 2021 PGA Championship, he finished in a tie for eighth place and five shots behind Phil Mickelson.

After making a crucial bogey on the 6th hole, the young American was in outright second place and one shot ahead of Cameron Young and Englishman Matthew Fitzpatrick.

Ironically, all four of these players are yet to secure their first win on the PGA Tour. At this point, Rory McIlroy was six shots behind on 3-under-par.