Jordan Spieth KICKS HIS DRIVER in rage at PGA Championship

Jordan Spieth's anger got the better of him in the third round of the PGA Championship as he drifted completely out of contention. 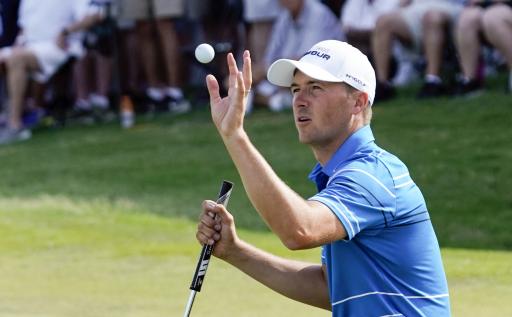 Jordan Spieth let rage overtake him during the third round of the PGA Championship as he kicked his driver across one of the tee boxes in Tulsa.

Spieth made four bogeys and a calamitous double-bogey on the 1st hole to drop out of contention on Saturday. He carded a 74 to fall back to 5-over-par.

At one stage, the 28-year-old couldn't hold back his frustration any longer. One fan was lucky enough to capture some close-up footage of the three-time major champion at Southern Hills.

As he hit his drive, he signalled to the right. He dropped his driver over his shoulder and he kicked it across the floor. It was a somewhat uncharacteristic outburst.

Related: Jordan Spieth shot BOUNCES OUT OF WATER during PGA Championship third round

Speith is usually calm and collected and this showed when he beat Patrick Cantlay in a playoff to win the RBC Heritage in April.

The Texan finished 54 holes in tied 45th place on Saturday and he will have to wait another year until he is able to complete the last piece of his major grand slam puzzle.

Despite Spieth's anger coming out yesterday, he did receive an incredibly lucky break on the par-4 12th hole when he drove his ball into some trees.

From 120 yards away, he punched a low shot under the trees but his ball was heading for the water. Somehow, it landed straight in but skipped out of the hazard.

It certainly wasn't a boring day for the 13-time PGA Tour winner. He will certainly be hoping for a better final round to pick up some extra place money.