Mickelson enters the record books and then sips wine while replying to tweets... 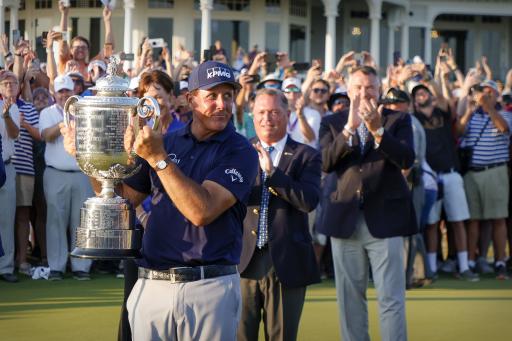 Phil Mickelson has admitted to being "half lit" while drinking wine on a plane having entered the record books at last week's US PGA Championship as the oldest major champion of all time.

Mickelson, who will celebrate his 51st birthday in three weeks time, responded to a fan's tweet as to how he was celebrating his sixth career major title and etching his name on the Wanamaker Trophy for a second time.

RELATED: MICKELSON'S MUM SENT HILARIOUS TEST AHEAD OF THE FINAL ROUND OF THE US PGA

"Are you a plane right now?" tweeted ACL Recovery Club on Twitter, to which Mickelson responded: "Yes. Sipping wine, half lit, tweeting. Life is good."

Mickelson, who is now back home in California, replied: "Have you tried my coffee?"

One golfer tweeted Mickelson telling him they have completely changed their opinion of him in recent times.

"Hey Phil, I hated you growing up for some reason, but impossible to still hate, you're an awesome dude and an even better golfer. Congrats!" read one tweet.

The World No.32 explained how fasting has been key to him rolling back the years at the age of 50 on the PGA Tour.

"I fast 36 hours every week, so I give up all food for a day and a half and let my body kind of reset," said Mickelson.

WATCH: BROOKS KOEPKA INFURIATED AS BRYSON DECHAMBEAU WALKS PAST HIM DURING US PGA INTERVIEW!