Rory McIlroy started fast at Southern Hills with a 65 on Thursday, but beginning well at tournaments has previously been a struggle for the Northern Irishman. 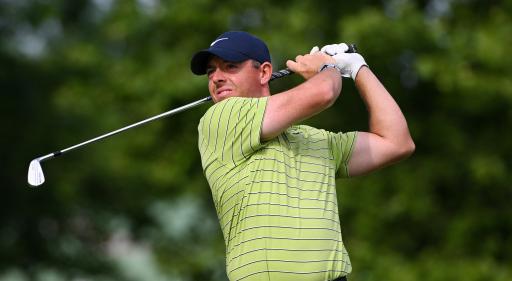 Rory McIlroy joked that he'd rather be battling to make the cut after setting Southern Hills alight in the first round of the PGA Championship.

McIlroy hasn't won a major championship since 2014 and a key reason for this has been his inability to burst out of the blocks, leaving himself with too much to do at the weekend.

This was evident at The Masters in April. McIlroy began his week with a pair of 73s and ended up finishing second behind Scottie Scheffler with an incredible 64 in the final round.

The two-time PGA champion is looking for a hattrick of Wanamaker trophies this week and he has given himself a great chance at 5-under-par.

"No, no, I'd rather shoot 74 and try to make the cut tomorrow," McIlroy joked.

Related: ESPN announcers stunned by the size of Tiger Woods' sandwich at US PGA

"It was a great start to the tournament. I've been playing well coming in here. I've been carrying some good form. Obviously, that took a lot from that last round at Augusta, played well up in DC at the Wells Fargo there, and played good in the practice rounds earlier this week.

"I think when your game is feeling like that, it's just a matter of going out there and really sticking to your game plan, executing as well as you possibly can, and just sort of staying in your own little world. I did that really well today. It was nice to get off to that good start and keep it going.

"I feel like this course, it lets you be pretty aggressive off the tee if you want to be, so I hit quite a lot of drivers out there and took advantage of my length and finished that off with some nice iron play and some nice putting."

The 33-year-old leads by one shot ahead of Will Zalatoris and Tom Hoge and he outperformed his playing partners in the first round's marquee group.

Jordan Spieth, looking for his career grand slam in Tulsa, shot 2-over-par and Tiger Woods struggled to a 74.

Next Page: Tiger Woods after Round 1 of US PGA: "Playing that kind of golf is gone"