Tiger Woods after Round 1 of US PGA: "Playing that kind of golf is gone"

Tiger Woods conceded his approach may have backfired at PGA Championship as he admitted the "game has changed". 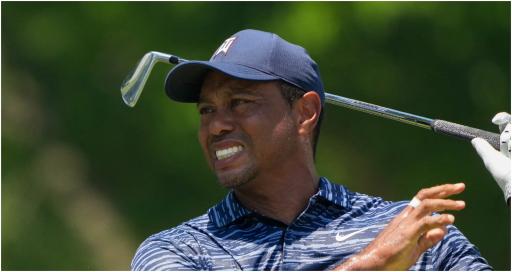 Tiger Woods admitted the game has changed completely after carding a disappointing opening round at the PGA Championship.

Related: Big names get off to a torrid start at PGA Championship

Woods, 46, got off to a hot start by making birdie at his first hole at Southern Hills Country Club but from there it looked like he began to struggle.

He is in the afternoon wave for round two and will need to dig deep if he is to make the cut, though he did make one key admission immediately after carding an opening 4-over par 74 in Oklahoma.

That admission was that the days of plotting your way round a golf course are perhaps a thing of the past. At least for this generation of big hitters who opted for drivers off the tee when Woods chose his irons.

Woods decided to stick a 2-iron and a 3-iron in his TaylorMade golf bag this week but his approach, he conceded, may have backfired.

Those on the ground at Southern Hills have said that the sound of Woods flushing an iron is still incredible to listen to. Like a gun being fired. But has he shot himself in the foot at the U.S. PGA?

A visibly exhausted Woods, drenched in sweat, told the media: "Well, it wouldn't have been so far back if I would have hit the iron shot solid and put the ball in the fairway. I was playing to my spots, and those guys obviously have a different game plan. It's just different.

"The game is played very differently now, and it's very aggressive. We were talking about it today, Joey [LaCava, his caddie] and I, the days of the Lee Janzens and the Scott Simpsons and the Faldos of the world, playing that kind of golf is gone.

"The game is just different. It's much more aggressive now, and I know that. But I was playing to my spots.

"But I didn't do that. I put the ball in the rough over there on 4 and hit the tree on 9 and ended up hitting a 4-iron in there."

Woods, who won the PGA Championship at Southern Hills in 2007, also conceded that right leg didn't feel as strong as he would have hoped before he headed for his ice bath.

"It has felt better before. It's a little sore right now, and we'll go back and start the process of getting ready for tomorrow," he told the media.

It was Rory McIlroy who held the 18-hole lead in Oklahoma after firing an opening round of 5-under 65.

The Northern Irishman, 33, admitted that it was just nice to get off to a hot start in a major for a change.

Woods, McIlroy and Jordan Spieth will tee off in their second round at 19.36pm BST.

Why Bryson DeChambeau withdrew from PGA on eve of major