Scottie Scheffler took out his frustration on his driver during the opening round of the PGA Championship. 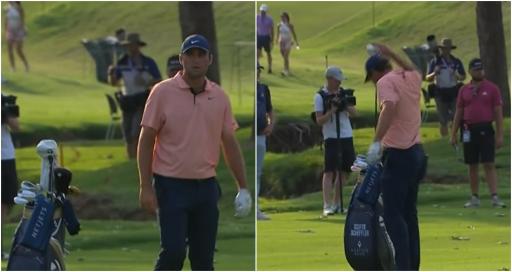 World No.1 Scottie Scheffler appeared to let his temper get the better of him during his opening round of the PGA Championship.

It wasn't the start Scheffler was hoping or expecting and the reigning Masters champion said he was further back than he wanted after round one.

The 25-year-old fired an opening round of 1-over par which at the time of writing was good for T-38 on the leaderboard.

He was part of the afternoon wave and in fairness Southern Hills Country Club was playing one stroke harder as the winds picked up.

Scheffler showed just why he has been winning seemingly every week with a stunning eagle at the par-5 fifth hole.

With his second shot he found the green from exactly 300 yards and duly rolled in the putt with ease.

From there, five birdies and three bogeys followed. "I'm still pretty frustrated with how I played the back nine," Scheffler said.

"But overall 1-over par playing as poorly as I did today is not -- I didn't shoot myself out of the tournament, so I'm still in okay position."

Scottie Scheffler showed his anger after being forced to take a drop after his tee shot found the water on the 18th hole at Southern Hills. pic.twitter.com/9VYU0anRWb

Still, we did see something from Scheffler that we haven't really seen so far in his pro career. An outburst of anger.

When Billy Horschel did something similar a few years ago at the Masters, he had to apologize to the patrons.

Scheffler was playing his final hole of the day and sent his drive into the water and had to take a penalty drop.

The footage shows Scheffler taking out his frustration on the club. Sometimes golf clubs just need to die.

Scheffler actually managed to get up and down to save his par. From 185 yards. So it's not all bad. You're still good at golf, Scottie.

He told the media: "Yeah, I mean, it's early in the week; still a lot of golf left to play.

"I guess I'm six back now, so six shots over three days really isn't that big of a deal.

"I'm definitely a lot further back than I had hoped to be, but at the end of the day I'll probably be in 40th place.

"This is one of those golf courses where you could have a really great round, and so for me just kind of taking what the weather is going to give us tomorrow morning and kind of go from there."

Why Bryson DeChambeau withdrew from PGA on eve of major