Sergio Garcia has made no secret of his desires to leave the PGA Tour. How will he react to this? 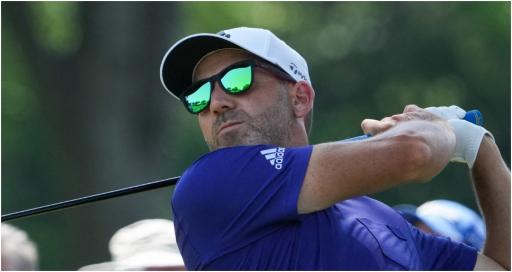 Sergio Garcia has made no secret of his unhappiness recently.

When playing at the Wells Fargo Championship, the temperamental Spaniard told a rules official that he couldn't wait to leave the PGA Tour.

It was only a few more weeks, he told the official, that he'd have to put up with the Tour. It was a heavy hint towards his Saudi future.

In complete and utter fairness to Garcia, 42, he was absolutely hosed when on the receiving end of that incorrect ruling.

Even the PGA Tour later clarified that they had made a mistake. Still, they didn't send the Spaniard an apology.

Garcia, as you might know, is one of several players who have requested releases to the Saudi-backed LIV Golf Invitational Series.

Both the main tours have told Garcia and others that they will not grant them. England's Richard Bland says he will play regardless.

For Bland, his best playing days are behind him. He's nearly 50 and he says he has the chance to make the next stage of his life comfortable.

Last week, Rory McIlroy said he was rooting for the whole rival league drama to be over as he admitted his stance had changed over the exiled Phil Mickelson.

Still, though, some golf fans appear to be unhappy with players accepting the riches on offer as the source of the money comes from a nation that has an appalling human rights record.

"They execute people over there for being gay," Mickelson previously said.

For some reason, golfers who have been wanting to accept the Saudi riches have been targeted more than other sports stars.

Even Lee Westwood pointed this out as he sought to defend his decision in wanting to play the mega money series.

The field for the inaugral event at Centurion Club next month is due to be released next week.

At the time of writing, we still don't know where the series will be broadcast. It has been reported that YouTube will show the first series for free.

We expect Garcia to be in the field.

Golf fans have also blasted the ticket prices for the first event in June, leading some to suggest that the crowds for the 54-hole shotgun events will be a little bit lacking.

Golf writer Kyle Porter took aim over Garcia on this point during the first round of the PGA Championship at Southern Hills with this joke.

Make of this what you will:

Sergio getting acclimated to those LIV Golf galleries a little early. pic.twitter.com/48PCXPkOlZ

Still, what happens in the next few months will be interesting to watch. Are you rooting for this drama to all be over? Do you care? Will you be watching the LIV Golf Invitational Series?

Tiger gets grumpy with camera operator

Dustin Johnson reveals what "difficult" wedding he had

Why Bryson DeChambeau withdrew from PGA