Former Open champion David Duval hits out at Phil Mickelson over his silence. 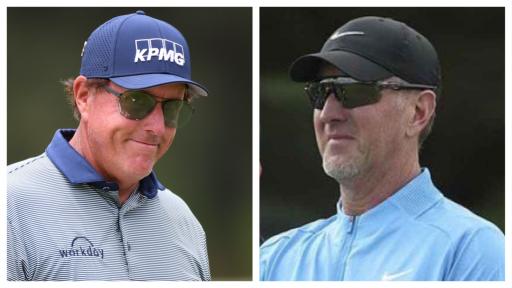 Former Open champion David Duval has blasted Phil Mickelson for remaining silent in the aftermath of his controversial comments surrounding the Saudi-backed LIV Golf Invitational Series and the PGA Tour.

Remaining on the sidelines while he continues to figure out his golf career and reflect on his controversial comments to golf biographer Alan Shipnuck, golf's oldest major champion Mickelson chose to bypass the defence of the PGA Championship this week.

That has not sat well with Duval, who considers Mickelson needs to be "man enough to stand up and answer the questions".

"The silence is what is so loud right now," said Duval during ESPN's broadcast of the PGA Championship.

Duval added "He’s dug a hole that I struggle to see him getting out of."

Related: Tiger Woods reveals why he has not reached out to Phil Mickelson recently

He continued: "Well, you know, like everybody else, I was quite disappointed in what he said.

"I think the remarks disparage everybody who came before him who built this wonderful, charitable product that does so much good, provides such a life for so many people and so many players and their families. That extends in their ability to do charitable works as well.

"You know, having just a statement sent out there that you can control answers nothing. Unfortunately, as you look at it, to me, he’s dug a hole that I struggle to see him getting out of. I don’t see the exit strategy, especially when you don’t address what it is you’re saying and what you meant by the words you had to say and really what was the entire point of what you’re trying to accomplish."

As for Mickelson's no-show as defending PGA champion, Duval said: "It is unquestionably a massive disappointment to this great sport and the great fans of this sport.

"What he accomplished last year at Kiawah, you could argue, might be the greatest victory in professional golf there’s ever been; it’s on that very short list.

"Historical, unimaginable, certainly not anything that anybody expected to see have happening again and not to have that victory march, if you will — that, if you want to call it, a sendoff, whatever it may be — that he so rightly earned at Kiawah but then he just seemingly threw away a number of months back with his thoughts and his actions is just incredibly disappointing."

It remains to be seen whether Mickelson decides to return to competitive action for the first LIV Golf Invitational Series event at Centurion Club in England in the second week of June.

PGA Tour and DP World Tour officials have denied player releases for the tournament, meaning players on both circuits could face a lengthy ban if they decide to compete in the inaugural LIV Golf event in St Albans.