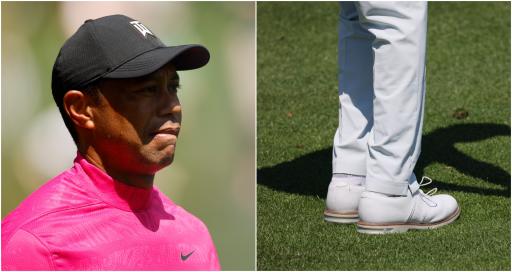 Tiger Woods shocked us all when he arrived at Augusta National for the 86th Masters but also turned the heads of his loyal golf fans when the Nike front man wore FootJoy golf shoes.

Woods, 46, chopped and changed between black and white pairs of FootJoy Premiere Series Packards throughout the major week.

Multiple news outlets published stories about his choice of footwear. It may not seem like a big deal, but it really is an incredible flex by Tiger.

Seeing Woods without a Nike swoosh on his clothing seems…just wrong.

The explanation before Woods initially commented about it all was that it was down to his search for a stable shoe with his current levels of limited mobility.

His heavily damaged and glued together right leg led him to calling himself Humpty Dumpty. “Hopefully he’s good enough this week,” he said.

That explanation, in my opinion, doesn’t really stand up to scrutiny. Woods will have known for a while what he had been planning. Nike would have known he was practicing again, and hard.

Woods told the media about how many nuts and bolts were in his right leg after it was crushed by the weight of his Genesis SUV back in February last year.

Even Justin Thomas said he was “horrified” when he saw the state of the limb.

If Woods needed a special shoe that was more stable then Nike should have and would have made one for the 15-time major champion.

They likely could have painted a swoosh over a different shoe and gotten away with it. Many elite sports stars all over the world do things like this.

They might be representing one brand but wearing another. You can spot from afar.

For years Woods has been doing things like this. Think about his Bridgestone golf ball when Nike were making golf hardware, or the fact the grip he uses on his famed Scotty Cameron isn’t a Scotty grip. It’s from PING.

If Woods needed something from Nike before stepping out on the course he will have said so.

Which seems to suggest that Woods, in this particular scenario, was simply not interested in collaborating with Nike over his golf shoe.

He is not on a life time deal with Nike and we do not know the details of when his current one expires.

But one thing is clear in my mind: Humpty Dumpty isn’t happy with Nike about his golf shoes.

Here’s what Woods said about his footwear at The Masters

“Well, I have very limited mobility now. Just with the rods and plates and screws that are in my leg, I needed something different, something that allowed me to be more stable. That's what I've gone to.

“Nike's been fantastic over the years of providing me with equipment and work, and we have worked, we've been working on trying to find something to allow me to do this and swing again. We're still going to continue doing it, and hopefully we'll have something soon.”

Here’s what Nike said about Tiger’s choice of footwear

“Like golf fans around the world, we are delighted to see Tiger back on the course. He is an incredible athlete, and it is phenomenal to see him returning to the game at this level.

“His story continues to transcend sport and inspire us all. As he continues his return, we will work with him to meet his new needs.”