Greg Norman's days as the figurehead of LIV Golf Investments are reportedly numbered. 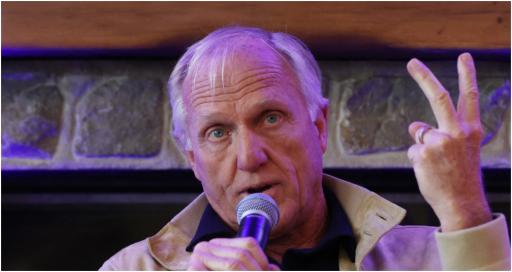 Greg Norman's days as the figurehead of the Saudi-backed rival golf league appear to be numbered, according to one report.

Alan Shipnuck, the author of the forthcoming biography about the exiled Phil Mickelson, has made the claim in his latest article.

He claims that a PGA Tour agent has confided in him that Norman is "on his way out" and will be ditched by the Saudis as CEO of LIV Golf Investments.

WIN A NEW ODYSSEY PUTTER BY ENTERING IN THE COMMENTS TO OUR LATEST YOUTUBE VIDEO HERE:

We now know that Jack Nicklaus was first approached to do the role Norman is currently occupying.

Nicklaus told The FirePit Collective that he turned an offer of north of $100million to work with the Saudis.

The Golden Bear claimed that he turned down the dizzying sum of money once verbally and on another occasion in writing.

"I was offered something in excess of $100 million by the Saudis, to do the job probably similar to the one that Greg is doing," Nicklaus said.

"I turned it down. Once verbally, once in writing. I said 'Guys, I have to stay with the PGA Tour. I helped start the PGA Tour.'"

Norman got himself into hot water last week when he spoke to the media about his plans for the LIV Golf Invitational Series and the current situation regarding the PGA Tour and DP World Tour rejecting their members releases to compete in the inaugral event.

He was pressed on the issue of Saudi Arabia's human rights abuses, denying that he was complicit in sportswashing and went further by describing the murder of the journalist Jamal Khashoggi as "a mistake".

Khashoggi's fiancée described his comments as "so hurtful". She asked whether The Great White Shark would make the same remark had it been his loved one who was butchered.

Later, his PR team tried to repair some of the damage.

In a statement, LIV Golf Investments said: "The killing of Jamal Khashoggi was reprehensible.

"Everyone agrees about that, including Greg and he has said as such previously on many occasions. Greg also knows that golf is a force for good around the world and can help make inroads toward positive change."

The report states: "A prominent Tour agent recently confided that he is hearing Norman is on the outs with the Saudis, which would be another wild development in this saga.

"If a leadership change is imminent with LIV Golf, that would be all the more reason for [Phil] Mickelson to pass on the PGA Championship and take more time to assess a chaotic situation."

The first event of the LIV Golf Invitational Series is scheduled to take place at Centurion, near London, over June 9-11.