Alex from GolfMagic counted down the top 10 moments of the PGA Championship as the second major tournament of the season begins tomorrow. 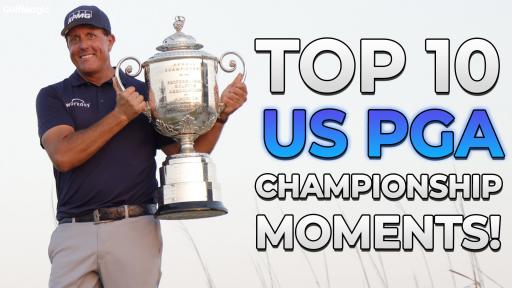 We are on the eve of the PGA Championship at Southern Hills where many players will be going for glory at the Oklahoma venue.

Tiger Woods is making just his second appearance on the PGA Tour since his serious car crash in February 2021, while Jordan Spieth is aiming to complete his career grand slam.

World No.1 Scottie Scheffler is also going for back-to-back major wins after his victory at The Masters, while Rory McIlroy could complete a US PGA hattrick.

Alex from GolfMagic started the countdown of the top 10 most memorable moments from the US PGA with Y. E. Yang's dramatic upset victory against Woods in 2009 at Hazeltine.

Yang became the first Asian-born player to win a men's major. At number nine, we have Jack Nicklaus who won his fifth PGA Championship with a seven-stroke masterclass at Oak Hill in 1980.

Next up is Bob Tway denying the now-controversial figure Greg Norman at the 1986 PGA Championship at Inverness Club. Tway holed a dramatic greenside bunker shot on the 18th hole to secure his only major victory.

At number seven, we have Davis Love III's win in the tournament in 1997. Love holed a birdie putt on the 18th hole at Winged Foot to also secure the only major title of his career.

Tiger Woods defeated Bob May in a three-hole playoff at the 2000 US PGA and this is at number six. Woods became the first player since Ben Hogan in 1953 to win three major championships in the same calendar year.

Our halfway point in the list is Rory McIlroy's second US PGA success in 2014. He picked up his fourth major title in the dark at Valhalla following a great battle with Phil Mickelson and Rickie Fowler.

Number four is John Daly's victory at Crooked Stick in 1991. He won the tournament by three shots having entered the week as the ninth alternate player.

In the bronze medal position, we have Colin Morikawa sealing the deal in 2020 with one of the greatest drives in the history of the event on the 16th hole at TPC Harding Park. He made an eagle on his way to his first major title on his US PGA debut.

Number two is Brooks Koepka's victory in 2019 at Bethpage. He became the first player to successfully defend his title from the previous year at the US PGA and the US Open in a career.

I think we can all agree on what is the most memorable moment in the history of the PGA Championship. Click on the video above to find out.

NOW WIN A NEW ODYSSEY PUTTER - JUST ENTER VIA THE COMMENTS IN THE BELOW YOUTUBE VIDEO: