World No.76 Maverick McNealy is teeing it up at the PGA Championship this week, but life could've been very different had he not chosen golf. 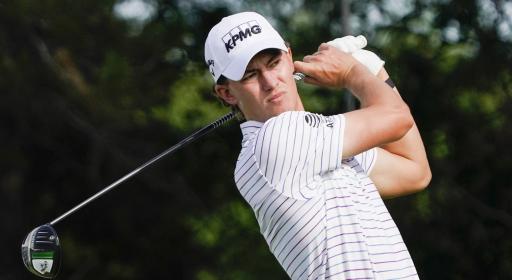 Maverick McNealy joined the PGA Tour in 2020 and although he is yet to win, he has established himself as a consistent performer in the world's top 100 players.

McNealy has two runner-up finishes to his name and along the way, he has earned $5,521,259 which is actually a fraction of what his father Scott is worth.

WIN A NEW ODYSSEY PUTTER BY ENTERING IN THE COMMENTS TO OUR LATEST YOUTUBE VIDEO HERE:

Scott McNealy used to be an avid golfer himself but in 1982, he co-founded the computer technology company Sun Microsystems alongside Vinod Khosla, Bill Joy and Andy Bechtolsheim.

In 2010, Scott stepped down as the CEO and the company was sold for a huge $5 billion. Their family home was once valued at $72 million and it had its own ice rink, golf course, basketball court, tennis court, climbing wall, pool, sauna and jacuzzi.

Scott is reportedly worth $800 million but despite his riches, McNealy previously revealed that his father made sure he and his siblings remained grounded and knew the value of money during their childhood.

"My brothers and I never got an allowance, and we were told that once we graduated from college, we’d have one summer to find a job and then we’d be on our own," McNealy said.

"My dad would’ve made me pay rent to live at home after school - I’m not kidding!"

The 26-year-old studied Management Science and Engineering at Stanford University and he graduated in 2017. He has three brothers named Dakota, Colt and Scout who are all named after cars because their grandfather worked in the Detroit auto industry.

McNealy chose a career in golf over a career in business and he certainly made the right decision. He is making his fifth appearance at a major championship this week at Southern Hills and he will be hoping to make his first cut at a major tournament.