Cameron Smith on hitting Wise with errant shot: "No one told me!"

Cameron Smith only found out after he finished his second round at the PGA Championship that his golf ball struck Aaron Wise. 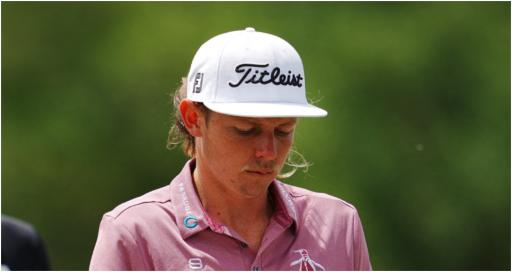 Cameron Smith admitted he had no idea he struck Aaron Wise on the head with an errant tee shot during the PGA Championship until he finished his second round.

It was a moment that had every golf fan wincing. For Wise, he managed to finish up his round after being struck in the back of his dome by Smith's golf ball.

Smith hit his tee shot on the second hole and he sliced it way, way right of his intended target and his ball eventually landed smack bang in the middle of the seventh fairway at Southern Hills.

The only problem was that before it came to rest it struck Wise. The horizontal sharpie line Smith used to mark his golf ball left a mark on Wise's Adidas cap.

Smith did yell "fore" from more than 300 yards away but it still struck Wise.

Wise told GolfChannel: "I was surprised my ball wasnt in the fairway, and the next thing you know, there's a little bit of ringing in my head and I was down on the fairway."

His playing partner was Joel Dahmen. He described it as a "glancing blow" and after contact the golf ball went another 40 or 50 yards down the fairway.

Dahmen told GolfChannel that "all the spectators" heard it and the contact was loud. "He was definitely shook getting into the next shot, for sure," Dahmen said.

Wise, 25, was seen to by medics after placing a cold water bottle on his head for a few minutes. Even when he finished his round he spent another 20 minutes being checked over, it has been reported.

When Smith was asked about it all, he told GolfChannel: "Oh, I didn't know that. No one told me. Oh, I’m so sorry. That's the first time that I've heard it. I hope he's alright."

Wise added that he "feels fine". "A little sore, but fine!"

Aaron Wise was hit in the head by an errant tee shot from Cameron Smith on the par-4 7th hole.

Wise was able to finish out his final three holes and complete his round. pic.twitter.com/9guegRQVxR

Cam Smith’s tee shot on the 2nd hole hit Aaron Wise in the head on the fly. Here’s ESPN+ Featured groups coverage talking about it pic.twitter.com/TYeLjxV11J