US Open: Matt Fitzpatrick on becoming big hitter: "My drug test was negative!"

Matt Fitzpatrick has improved every part of his game in 2022, including his distance and this showed throughout the week at the US Open. 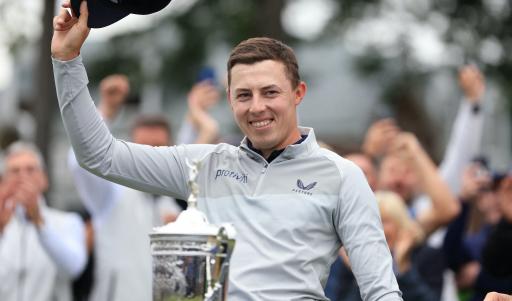 Matt Fitzpatrick joked that he passed a drug test when asked if he had been on a similar conditioning programme to Bryson DeChambeau ahead of the US Open.

One of the many improvements that Fitzpatrick has made this season has been his long game and this became abundantly clear at The Country Club in Brookline.

His ball speed has also increased rapidly and he told the press after his maiden major victory that he and his coach Mike Walker have worked tirelessly in this department for a couple of years.

"I've done my drug test, and it was negative, so we're all good," Fitzpatrick said.

"Since 2020, I spent a lot of time working with Mike Walker and my coach and biomechanist Sasho Mackenzie. We did a little bit then, and he gave me this speed stick called The Stack.

"I've been doing that religiously week in and week out. It's like going to the gym basically. It's like a training program. I'll be honest, it's worked wonders.

"I feel like maybe three years ago if I was in this position, four years ago, and I was playing with Will in the final group, I'd be concerned that I'm going to be 15, 20 behind him.

"And I felt comfortable all day that I was going to be past him, which to me gives me confidence obviously going into the next shot knowing that you've got less club.

"I don't know. There's a bit of a mentality thing that when you're hitting it past people, it's quite nice."

The Englishman, Will Zalatoris and Scottie Scheffler produced an incredibly dramatic final round which saw many twists and turns. Each of these three players led on their own at one point.

But Fitzpatrick, who won the US Amateur at The Country Club, only missed three fairways and just one green which ultimately took him to a round of 68 to finish one clear of his American competitors.

He may not be averaging 319.1 yards like Rory McIlroy, who is statistically the biggest hitter on the PGA Tour, but his long game improvement is a key reason why he can now call himself a major champion.