Golf course manager on golfers putting with flag in: "It's a gimmick!"

GolfMagic partners with BIGGA to learn what five top course managers have to say about golfers putting with the flagstick in... 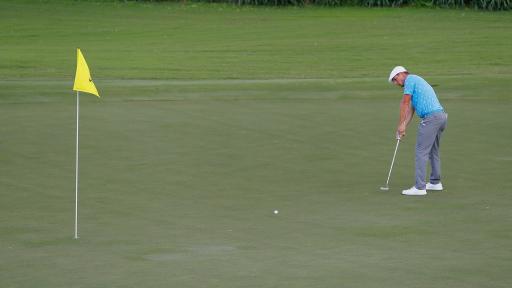 With golf's new rules now allowing golfers the option of putting with the flagstick in the cup on the green, we teamed up with the British and International Golf Greenkeepers Association (BIGGA) to get the lowdown on what some of the best golf course managers in the land are saying about it all.

When The R&A and USGA announced updates to the rules of golf for 2019, no change made more of an instant impression than that regarding putting with the flag in.

The abolishment of a two-stroke penalty for putting with the flag still in the hole was, according to the governing bodies of golf, intended to help speed up play.

But what about things from a greenkeeping perspective? We spoke to five course managers at some of the UK’s top courses to discover what impact the rule change had upon how they were able to present their courses.

Gordon Mckie is course manager of the most famous golf course in the world, the Old Course at St Andrews. With more than 45,000 rounds of golf being played on the historic links each year, Gordon said the rule change is having a big impact on the condition of each hole.

Gordon said: “I think there is a whole lot more damage to the hole itself, with golfers trying to extract the ball with the pin in. We change our holes every second day, but we still see damage.

“The idea of leaving the pin in seems great, but I think even the pace of play is not affected too much in terms of speeding things up. I notice from playing golf that some golfers like the pin in and some do not, so that itself can even slow things down as you are constantly either putting the pin in or out to suit everyone’s preferences. From a greenkeepers perspective, I don’t think it is a great rule change!”

Steve Lloyd is course manager at The Worcestershire in the Malvern Hills Area of Outstanding Natural Beauty. He said that he can see the advantages of putting with the flag in the hole and added that it means greenkeepers have to make sure that they’re on their game.

Steve said: “The new rule that allows golfers to putt with the flag in has, in my opinion, been a bit of a gimmick. Everyone tried it out, just in case it was going to transform their game. Playing golf myself, I sometimes find it helpful to leave the pin in on downhill putts or from distance as it seems to help with distance perception.

“The one thing we’ve found is that it’s even more important to make sure the cups are set correctly, upright and that pin ferrules are not worn, so as to make sure the pin stands perfectly upright. Any pins that tilt to the side, could cause bad comments from any golfer whose ball may not go into the cup.”

At Moortown, the Leeds-based course that hosted the first Ryder Cup match on British soil in 1929, course manager Steven Robinson said that he’s noticed an increase in the amount of damage caused to the hole.

“I don’t have a problem with the rule in terms of trying to speed up play and it definitely makes sense in matchplay, where you’re often going to have gimmes rather than needing to putt out,” said Steven.

“But the problem is the damage being caused to the cup and flagsticks, with golfers trying to retrieve their ball. I prefer the pin to be taken out for this reason. Alternatively, you can leave it in if putting from a distance, but take it out if you’re putting within 15ft from the hole, where you’ve got a realistic chance of holing out.”

James Bonfield is course manager at The Hertfordshire, designed by Jack Nicklaus II. He said that his belief is that when it comes to golfers looking after the course, there are many areas that can be improved, not just around the hole.

James said: “I haven’t seen a negative impact in or around the hole. We move our holes three times a week during the season, so maybe that has helped!

“Obviously, I would prefer the player to remove the flag to retrieve the ball, but there are other issues that you could prioritise when it comes to the etiquette of golfers around the course, such as the need for the player to repair pitchmarks, rake bunkers or replace divots.”

Up in the Scottish Highlands, Iain Macleod is course manager at Tain, a links course designed by Old Tom Morris that is 34 miles north of Inverness. He said that when he first heard about the rule change he had no idea of the impact it would have upon the course and is now wondering whether the decision should be reversed or changed to help out greenkeepers.

Iain said: “When I first read about the changes, I liked the idea of being able to putt with the pin in, without fear of a two-stroke penalty and agreed that it might speed up play.

“However, I never thought for a minute that so many golfers would putt with the pin in, all of the time, even for the shortest putts! Unfortunately, this has created problems for greenkeepers and golfers alike. By retrieving their balls from the hole with the pin still in, damage is being caused by all but the very careful. This creates more work for the greenstaff and the damage to the side of the hole can hinder following golfers when they try to hole out.

“The simplest way would be to try something that forces golfers to hole short putts with the pin removed, or at least make them remove the pin when retrieving their ball after holing out. But then, it may be that completely removes the reasons behind the rule change to begin with! I do feel a rethink of this ruling needs to be take place.”