Golf's SCARIEST holes around the world... which hole do you fear most?!

Three holes that still give us nightmares! Which hole sends a shiver down your spine?! 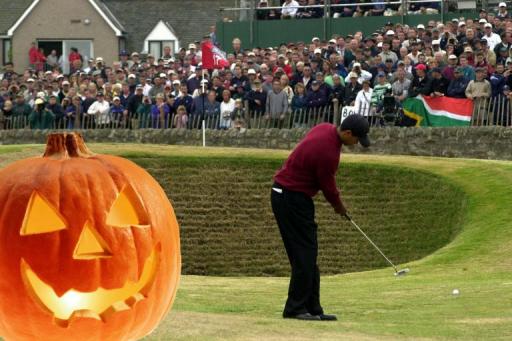 In honour of Halloween today, we have carved out three of the scariest golf holes that we have ever played here at GolfMagic.

Which hole gives you nightmares? Is it one of our chosen holes below, or is it one from your local club?

Come and share your thoughts and comments over on the GolfMagic social media channels as we would love to hear about your most petrified hole.

First up, we are headed to Scotland and the Home of Golf at St Andrews...

One of the most famous holes in golf, the Road Hole 17th has been the graveyard for many a pro golfer.

A challenging 455-yard par-4, the tee shot must be struck to perfection to avoid the dense rough - grown higher during Open Championship week - on the left and the out of bounds, next to the Old Course Hotel on the right.

The hole measures just shy of 500 yards when The Open swings around, but thankfully we played it from 40 yards further forward.

Even if you find the short grass off the tee, the approach shot must be played tantalisingly close the Road Hole bunker short left of the green.

In fact, you can even find the dancefloor in two and end up walking off the green 3-over par, just as the late great Seve Ballesteros once mused:

"You are on the green and you can still make double or triple, like I did at the 1979 European PGA Championship."

Seven might seem a card wrecker, yet poor old Tommy Nakajima fared two shots worse at the 1978 Open, after putting it into the bunker in three shots, before taking four more jabs out the sand and two-putting for a quintuple-bogey nine.

Cameron Smith appeared to come unstuck when his second shot finished just shy of the famous Road Hole bunker in the final round of the 150th Open Championship this July.

But the Australian putted his ball around the edge of it to some 12 feet and then drained the putt for what turned out to be a tournament-winning par and his maiden major championship, just weeks before heading off to join LIV Golf.

WATCH SMITH'S MAGIC WITH THE WAND

Here's a look at how we played the Old Course at St Andrews, just weeks before the 150th Open Championship:

Next up, we're off to Northern Ireland...

Calamity, the 16th hole at Royal Portrush, is a 236-yard par 3. What club are you taking out of the bag? #TheOpen #TeamTaylorMade pic.twitter.com/ElR0D5NnLA

Worryingly but justifiably called Calamity Corner, the signature par-3 16th at Northern Ireland's Royal Portrush measures 211 yards for the members and a beastly 236 yards when it staged the 2019 Open Championship won by Shane Lowry.

It used to be the 14th, but now it's the 16th - in case you were confused from having played it back in the day.

The hole demands a rescue or 5-wood - that must not go right - over a deep ravine in order to reach the green that is perched directly on a 100-foot precipice.

Into the wind, some of you will even need the driver for this one. It's a brute!

Slice the ball and you’re guaranteed at best a double-bogey five as the ball succumbs to the call of gravity, bouncing and rolling on a seemingly endless journey, down a steep slope toward the Valley Course.

"Calamity". The name of this hole says it all - a hole for strength and courage. Deep breath and swing.

Now we're off to sunny Spain...

A born-again hole, the outcome of much agonising and deliberation plus the inputs, separately, of late great Seve Ballesteros and Roger Rulewish, not to mention prodigious feats of engineering.

The world-famous hole used to be not much more than an extremely long par-5. Now, the second shot presents the player with a tantalising question: carry the water for a birdie or eagle, or just lay it up?

Rip a drive and you have a chance to reach with a fairway wood or long iron, but the prudent play is to lay it up and wedge it on for a safe par.

Be sure to control your zip action though, as anything under the hole with spin will soon find a watery grave.

The high stone wall to the right of the second landing area is a true gabion, just as they were built centuries ago, usually as part of a fortification. It acts as a retaining wall and also provides a spectacular viewing platform.

With a fast-running putting surface, and shaved off banks short and long of the green, there’s simply no room for error with the approach shot here.

Englishman Richard Finch won’t forget the hole in a hurry after racking up an 11 on this hole at the 2011 Andalucia Masters.

Miguel Angel Jimenez has better memories, carding his first career albatross here in 1995 – and the first that Valderrama had ever seen.

Graeme McDowell, who has now joined LIV Golf, also achieved the feat in 2007.

WATCH THOSE MOMENTS OF MAGIC FROM MIGUEL AND G-MAC BELOW

Some great golf being played at Valderrama; however nothing as good as Gmac's Albatross on 17, back in 2007.

Those are three of the scariest holes we have ever played before, but what are yours? Share your thoughts and comments over on the GolfMagic social media channels to get involved.