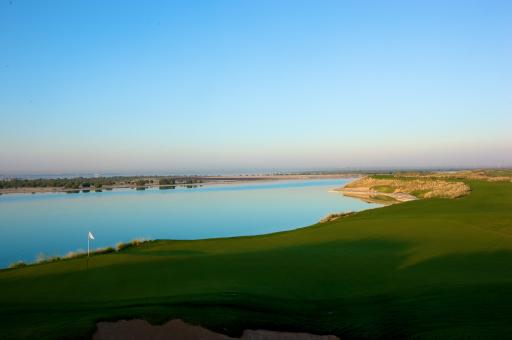 Oil-rich Abu Dhabi is really being put on the map of the sporting world in recent years. It already boasts a spectacular state-of-the-art Formula 1 circuit, as well as a Premier League football team which they’ve decided to base in Manchester.

And now Yas Links, the new Kyle Phillips-designed golf course, has been named the best course in the Middle East by Golf Course Architecture magazine.

Golf Course Architecture editor Adam Lawrence described Yas Links as “the first pure golf course in the Gulf” and “a golf experience like no other in the region.”

He added: “I am very confident in asserting that Yas Links is the best course in the Middle East by a distance, and that it has taken golf in the region to a whole new level.”

In a unique twist, Phillips was able to design not only the golf course, but the coastline along which the course runs. That’s because the channel along the western edge of Yas Island had to be dredged to produce the 1.8 million cubic metres of fill used to construct the golf course.

The result is a coastline that lends itself perfectly to exciting golf holes, and one that is also benefiting from an approved environmental programme that has introduced 130,000 mangrove plants.

Chris White, Yas Links general manager, said: “Kyle has created a breathtaking golf experience and one that is unique in the Middle East. It is a rolling, heaving golf course, weaving through sand hills and wending its way along the shoreline with views of the Arabian Gulf on all 18 holes.

“It is interesting talking to golfers as they come in from their rounds – you can see the exhilaration and enjoyment in their faces. They know they have played a very special golf course.”

Yas Links is peppered with 119 bunkers, while Paspalum Platinum links grass covers the sand hills and defines the fairways of the 7,414-yard, par-72 course, which has five different tee settings to make the course challenging from the Championship tees, while creating an enjoyable experience for members and visitors.

Golfmagic
Abu Dhabi
Kyle Phillips
Previous
Something for the Weekend: Hit a cut with your driver like Furyk
Next