Ashun Wu fired a scintillating score of 65 in the final round of the Magical Kenya Open to romp to his fourth victory on the DP World Tour. 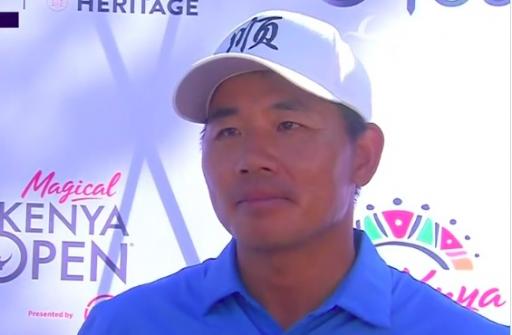 Ashun Wu scored a fantastic 6-under-par 65 to come from behind to become the first Asian player to win the Magical Kenya Open in Nairobi.

The Chinese star began the final round four shots behind leader Ewen Ferguson, but seven birdies on Sunday helped him to his fourth win on the DP World Tour.

Wu entered the week at Muthaiga Golf Club not having made a top-10 finish in 2022, but he has now claimed his first win since the KLM Open in 2018.

"It's a very, very good feeling. It was very tough today,  I was playing very well today I made seven birdies, so I did well and I'm happy to play golf in Kenya," Wu said.

Ferguson, who was looking for his first win on the DP World Tour, surrendered his lead early on Sunday with three bogeys on his front nine and two double-bogeys on his back nine.

Related: PGA Tour Champions Pro RUNS OUT OF BALLS and given two penalties in one round!

The moment Ashun Wu became the first Asian to win the #MagicalKenyaOpen pic.twitter.com/y260vuzbA8

Early in the day, there was heavy competition for the top of the leaderboard. Marcus Kinhult chipped in for birdie on the 6th hole to reach 12-under-par.

South African Thriston Lawrence made three birdies and an eagle in his first seven holes to reach 12-under-par too. He added another birdie at the 10th hole, but he was joined in joint-first place by Wu.

Wu made four consecutive birdies from hole 7 to hole 10. His birdie at the 10th hole suddenly gave him a two-shot cushion.

Lawrence, who won the Joburg Open back in November, posted a 66 on Sunday to set the clubhouse lead on 12-under-par.

However, with another birdie at the 17th hole, Wu took a three-shot lead into the final hole and he made his seventh and final birdie of the day on the 72nd hole to seal the four-shot victory.