Pablo Larrazabal beat Adri Arnaus and Jordan Smith in a playoff to win the MyGolfLife Open hosted by Pecanwood in South Africa. 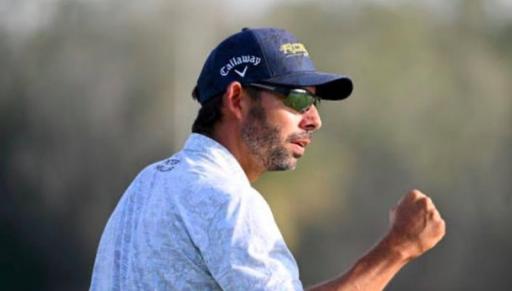 Pablo Larrazabal won for the sixth time on the DP World Tour after overcoming Adri Arnaus and Jordan Smith in a playoff at the MyGolfLife Open.

After carding a 67 in the final round at Pecanwood Golf & Country Club in Hartbeespoort, South Africa, Larrazabal found two birdies in the two-hole playoff to secure victory.

The Spaniard had only made three appearances on the DP World Tour in 2022 prior to this week, but he has his first win since the Alfred Dunhill Championship in 2019.

Larrazabal began the final round two shots behind the leader and home favourite Hennie Du Plessis on 17-under-par, but he reached 20-under-par with three birdies in his first five holes.

Smith made five birdies in his first 10 holes to join Larrazabal in the lead on 20-under-par. De Plessis could only make two birdies all day, unfortunately.

Related: Justin Thomas "BLACKED OUT" after bogey-free round at Players Championship

Arnaus, who lost to Rafa Cabrera-Bello in a playoff at the Acciona Open de España last year, made three birdies and one bogey on his front nine to sit one shot back on 19-under-par.

Larrazabal then made a fantastic eagle at the par-5 10th hole and a birdie on the 15th hole gave him the lead with three holes to play on 23-under-par.

However, the 38-year-old missed a short putt to bogey the 17th hole. Smith carded a bogey-free 65 to reach 22-under-par, while Arnaus slid a birdie putt by the cup on the 72nd hole to win the event on 23-under-par.

The three of them entered the playoff and unfortunately, Arnaus was first to blink. He missed his birdie putt on the 18th hole while Larrazabal and Smith made theirs.

But it was the experienced man from Barcelona who made another birdie on the second playoff hole, denying Smith his second win on the DP World Tour.

Next Page: Brooks Koepka's record on 17th hole at TPC Sawgrass is SHOCKING...