Colin Montgomerie is concerned that the PGA Tour and the DP World Tour are at loggerheads with the Asian Tour due to prize money. 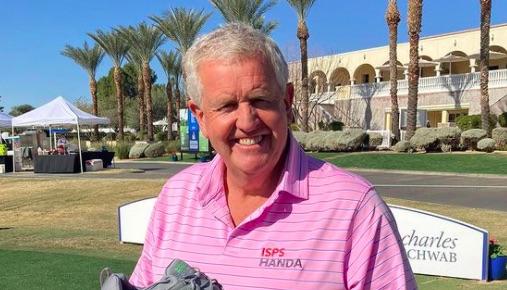 Colin Montgomerie wants the PGA Tour and DP World Tour to unite and "fight off" the Saudi-backed golf series that is set to emerge in the near future.

During the Slync.io Dubai Desert Classic, Montgomerie showed great concern about the amount of money in the game which he described as an "evil word."

Just next week, the Saudi International is set to take place with a stellar cast of PGA Tour players teeing it up at the Royal Greens Golf and Country Club.

The event is now sanctioned by the Asian Tour having been removed from the DP World Tour schedule, and it is the conflict with the Asian Tour that also worries Montgomerie.

"It's a shame it's come to this. We used to work well with the Asian Tour and now we are at loggerheads because of money," he said to BBC Sport.

RELATED: WATCH: BRYSON DECHAMBEAU'S EPIC STRUGGLE TO GET A VOLUNTEER TO MOVE OUT THE WAY!

"It's a problematic issue. It's that horrible, evil word, money. The mighty dollar ruling people's hearts and minds.

"We never played the game for money as such on the European Tour (DP World Tour) when I first started out. I was trying to see how much better I could get as a golfer. Now it's all about that evil word, money.

"It's a shame. Let's hope the European Tour is closer to the PGA Tour than we've ever been before and we can fight it off."

The prize fund for the Saudi International has risen to $5 million, which is what has attracted players such as Bryson DeChambeau, Phil Mickelson and Xander Schauffele.

The Public Investment Fund, the sovereign wealth fund of the Saudi Arabian government, are now the title sponsor of the event. They have also pumped $200 million into the Asian Tour.

This sort of investment is an alleged example of 'sportswashing' in order to protect their questionable human rights record. This can also explain the Saudi-backed golf league which is set to emerge in the near future.

Two-time major champion Greg Norman was revealed as the commissioner of this league, but we are yet to hear any further developments.

"There are some big names from the US coming over to participate and be courted into this system and let's hope, putting my old man's hat on, let's hope we fight it off.

"We've had a couple of these ideas before, other leagues trying to damage the game which was never broken. The PGA and European Tours are not broken, they are in good health. So why try to fix something that isn't broken?"

However, the Scot does understand that the players cannot be blamed for going to the tournaments that offer the most prize money. As DeChambeau and Shane Lowry have both said, they are golfers and not politicians.

Montgomerie said the players' decision-making will be very interesting, alluding to whether defecting to another tour could affect their chances of playing in the Ryder Cup in the future.