Danny Willett hosted the Betfred British Masters at The Belfry and with each birdie he made, he raised £1,000 for Prostate Cancer UK. 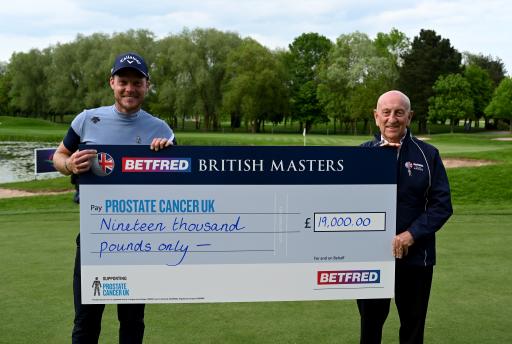 Tournament host Danny Willett raised £19,000 for Prostate Cancer UK during his week at the Betfred British Masters at The Belfry.

For the second year running, Willett chose Prostate Cancer UK as the event's official charity and Betfred pledged to give £1,000 for every birdie and £2,000 for every eagle that the 34-year-old made throughout the week.

Willett secured £12,000 for the cause in the first two rounds in the Midlands and at the weekend, he added seven more birdies to complete the total of £19,000.

Over the last two years at the popular stop on the DP World Tour, the 2016 Masters champion has raised £38,000 for the charity, as Betfred followed the same donation scheme in 2021 as well.

Willett, who has won eight times on the DP World Tour, is a long-term supporter of Prostate Cancer UK and throughout the week at The Belfry, he wore the charity’s ‘Man of Men’ badge.

"It’s an amazing contribution. Betfred's help during the week has been phenomenal, and it's nice to actually get the guys in and watch some golf live and have some interaction with fans. It's been a really special week," Willett said after coming tied 16th.

"It shows their massive support over these last two years, with me being the host and even the previous three or four years before that in sponsoring the British Masters, they have been tremendous in it, during COVID to still keep up the sponsorship and prize fund as they have, they have been amazing.

"Last year at the tournament, there were no fans due to COVID-19. Not only have we raised a lot of money for Prostate Cancer UK, we have also raised a lot of awareness about the disease. Fans were able to go to the tented village this week, speak to people about it and have a one-on-one interaction with a representative from the charity."

At the Betfred British Masters, spectators took part in the long putt and chipping challenges to raise funds for the charity. Including Willett's birdies, the charity raised more than £48,000 throughout the week.

Next Page: Tiger Woods and Phil Mickelson CONFIRMED in field for PGA Championship