Tiger Woods and Phil Mickelson were listed in the final field on Monday for the PGA Championship which begins next week at Southern Hills. 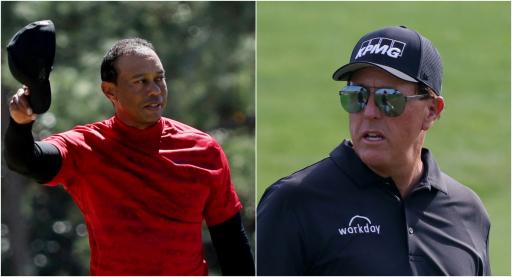 Tiger Woods and Phil Mickelson were listed in the field for the PGA Championship on Monday, leaving golf fans licking their lips for the tournament at Southern Hills.

In April, Woods visited the venue where he won the tournament in 2007. He played a practice round with club professional Cary Cozby on the bag.

The 46-year-old made a sensational return to the PGA Tour last month when he made the cut at The Masters. He came tied 47th but as the week grew on, he looked fatigued and ready to finish on the Sunday.

In his post-round interview on the last day at Augusta National, he confirmed he would play at The 150th Open Championship at St. Andrews, but he was unsure about the USPGA.

With his practice round banked, it seems the 15-time major champion is a dead cert to play just his second official PGA Tour event since his car crash in February 2021.

Related: The BEST Nike Golf bags to freshen up your game this summer!

As for Mickelson, he is the reigning PGA champion after becoming the sport's oldest ever major winner at Kiawah Island in 2021.

The 51-year-old hasn't played on the tour since January and he has been in exile due to his collusion with Saudi Arabia and representatives of the LIV Golf Invitational Series.

In a session with his biographer Alan Shipnuck, Mickelson described the Saudis as "scary mother****ers," referring to the alleged atrocities and the death of journalist Jamal Khashoggi.

Nonetheless, the six-time major champion was prepared to work with them to supposedly gain leverage over the PGA Tour. At the end of February, Mickelson apologised in an official statement.

At the end of April, Lefty was spotted playing golf at Rancho Santa Fe Golf Club. Could he have been preparing for a dramatic return to Tulsa, Oklahoma on May 19?

Next Page: Rory McIlroy has "no complaints" with his game ahead of PGA Championship