Thorbjørn Olesen was lost for words after he produced a pulsating finish to claim the British Masters at The Belfry. 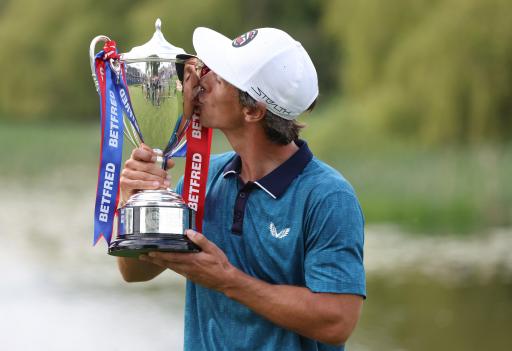 Denmark's Thorbjørn Olesen put off-field controversy behind him by producing one of the most remarkable finishes to claim the British Masters at The Belfry.

The Dane, who was cleared of criminal charges in the summer, took a three-shot lead into the final day but was behind with only two holes left in the tournament.

The 32-year-old managed to drain a 30-foot eagle putt at the par-5 17th and then followed that with a birdie putt of similar distance at the last to claim a one-shot lead win Sweden's Sebastian Soderberg.

Scotland pairing Connor Syme and Richie Ramsay, along with South Africa's Justin Walters, finished in a tie for third at 8-under par.

Ramsay made an ugly double bogey at his final hole to drop into that placing.

The tournament host, Danny Willet, finished in a tie for 16th at 5-under par after earlier shooting a glistening 65 on Friday afternoon.

For Olesen, it means that he has ended a four-year winless streak on the DP World Tour that stretches back to the 2018 Italian Masters.

Eagle-Birdie finish @Thorbjornolesen made two consecutive putts of 30ft and 36ft to win for the first time in four years.

Five months ago the Dane stood trial on charges of sexual assault.

He was alleged to have assaulted a woman on a flight to London on his way back from the World Golf Championships-FedEx St. Jude Invitational in 2019.

Olesen said he had no memory of the incident and his barrister ran the defence of automatism.

The Dane admitted he drank alcohol mixed with strong sleeping tablets. Ian Poulter and Justin Rose were also on the flight.

The jury cleared him after less than an hours worth of deliberations after a three-day trial in London.

Olesen later apologised for his actions and said he had paid a very heavy price for his mistake.

At the time, he was ranked 62nd in the world and this week at The Belfry he was 376th in the Official World Golf Ranking.

He told the media: "It's a massive tournament won by so many great names so it's a privilege to have my name on the trophy.

"It was obviously a pretty tough day and hit a lot of shots to the left. I was really struggling.

"I somehow just kept going, and yeah, what a finish. Incredible."

He added: "Standing on 17, I'm thinking I can make birdie, birdie and maybe get into a play-off. But obviously when I got the chance on 17, I prefer to take that. 18 is a tough hole, so par is a good score obviously. I just gave it everything."

The victory is his seventh win on the DP World Tour. Olesen was part of the successful 2018 European Ryder Cup team.