Brandon Stone was about to approach the 4th hole at Randpark Golf Club in South Africa before the weather hooter sounded. 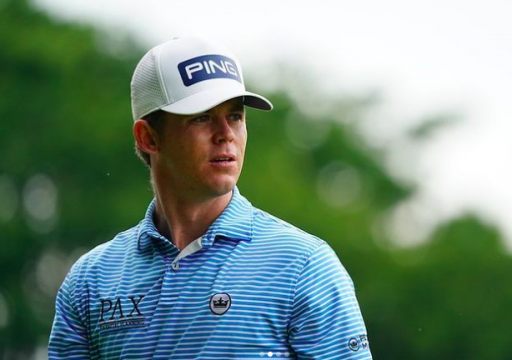 Brandon Stone was one of many victims delayed by the weather hooter during the second round of the Joburg Open on Friday.

The South African was level-par standing in the middle of the 4th hole, a par-5 and he was primed and ready to hit his shot towards the green.

As he set up to his ball and began to apply his focus, the hooter sounded which meant all golfers had to leave the course due to the threat of lightning.

"I was so ready for that!" Stone said as he comically threw his club to the floor. Weather delays are always frustrating. The players took to Randpark again when play resumed at 3.45 pm local time.

Stone went on to make a par on the 4th hole. The 28-year-old is a three-time winner on the DP World Tour and his most recent success came at the 2018 Scottish Open.

Play has been suspended due to inclement weather #JoburgOpen pic.twitter.com/DW8P3NEe2e

So far, the tournament belongs to Thristan Lawrence. Another home player shot his second 65 of the week to reach 12-under-par for the tournament. He currently leads by four ahead of Zander Lombard.

Lawrence began very well with three birdies in his opening five holes and for the second day running, he made an eagle at the par-5 14th hole.

A bogey at the final hole prevented the World No. 503 from extending his lead to five shots, nonetheless, he is a convincing 36-hole leader at the Joburg Open.

Ashley Chesters, one of the few Englishmen to stick around in the tournament after South Africa was put on the Covid-19 red list, shot a 69 on Friday to reach 7-under-par for the tournament and five shots behind Lawrence.

RELATED: LEE WESTWOOD RULES HIMSELF OUT OF BECOMING THE NEXT EUROPEAN RYDER CUP CAPTAIN

Dylan Frittelli, who became a winner on the PGA Tour at the John Deere Classic in 2019, shot a disappointing score of 72 in the second round to fall nine shots behind Lawrence.

The tournament has now been dominated by the news that as a result of the threat of a new Covid-19 variant, many golfers had to withdraw and rush back home to the UK to avoid having to quarantine.

The Joburg Open will continue but the Alfred Dunhill Championship later in December has been cancelled.