Daniel Gavins won the ISPS Handa World Invitational last year on the DP World Tour and he shot a superb 64 in round one of the Magical Kenya Open. 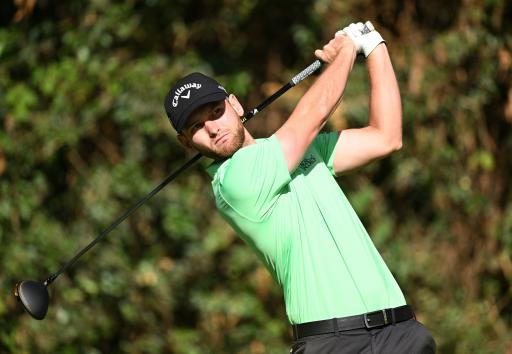 Daniel Gavins turned horrendous bad luck into amazing fortune on the 9th hole in the first round of the Magical Kenya Open on the DP World Tour.

The Englishman, who won the ISPS HANDA World Invitational last season, played his second shot to the 9th hole at Muthaiga Golf Club but it clattered the pin.

His ball rebounded back to the front of the green when it could've been a couple of feet from the hole. Gavins now had roughly 70 feet for a birdie.

He struck his putt perfectly and it travelled all the way into the hole. Gavins completed a miracle birdie and finished on 7-under-par for the day to set the early pace in Nairobi.

This putt was reminiscent of many of the clutch hole-outs that saw him win his first DP World Tour event at Galgorm Castle in August last year.

"I was pretty rusty to start with as I haven't played for a couple of weeks, but then I started holing a few putts," Gavins said after his round on Thursday.

"My second shot hit the flag and it knocked it 60 or 70 feet back down the green, but I holed the 70 footer for birdie which was a bit surprising, but it was nice to finish with a birdie."

Gavins is just one shot ahead of Shubhankar Sharma and Johannes Veerman, who won the D+D Real Czech Masters just three weeks after Gavins won in Northern Ireland.

Veerman, who started on the 10th hole like Gavins, made an eagle on his first hole to kick off his day in perfect fashion. He made five more birdies and a bogey to shoot a 6-under-par 65.

Impressive Italian Renato Paratore is four shots behind Gavins on 3-under-par and tied with the likes of Francesco Laporta and Justin Harding.

The popular Marcus Armitage, Adri Arnaus and Adrian Otaegui all shot rounds of 2-under-par on day one in Africa.

Next Page: EXCLUSIVE: Paul McGinley expects Tiger Woods to play at least one major in 2022