EXCLUSIVE: Paul McGinley expects Tiger Woods to play at least ONE MAJOR in 2022

European golf icon Paul McGinley believes that Tiger Woods will return to the PGA Tour by the end of the summer, potentially playing at a major championship. 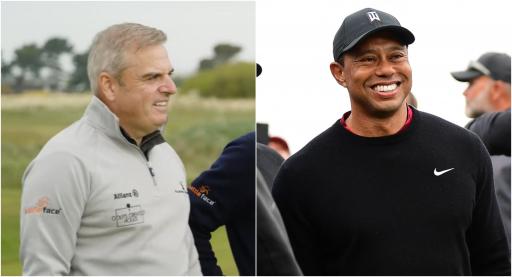 Speaking exclusively to GolfMagic, McGinley was encouraged by Woods' public appearance at the Genesis Invitational two weeks ago when he was present as a non-playing host.

The 46-year-old and his son Charlie came second at the PNC Championship in December and McGinley, 55, was very pleased with his performance, as were many golf fans.

Woods is still in rehabilitation from his horror car crash which happened over 12 months ago, and although he admitted he wanted to be further advanced in his recovery, McGinley believes that Woods will be back soon.

"I thought he looked well and certainly watching him play the father and son (PNC Championship in December), he looked good and his ball speed was good," said McGinley.

Related: "Phil Mickelson will be back!": Rory McIlroy on PGA Tour legend's mistakes

"His ball speed was up in the 170’s (mph). He wasn’t too hampered with his leg action and his strength is there. I know he’s playing everything down, but I’d be really surprised if we don’t see him play by the end of the summer.

"I’m sure there’ll be some appearances and he’ll know when he’s ready and he doesn’t want to put a date on it.

"He doesn’t want to put pressure and expectation on himself. I’ll be amazed if we don’t see him competing in a tournament by the end of the summer and certainly in some of the majors this year.

"At least one major or more I’d expect to see him playing. Maybe not Augusta because it is so hilly, it’s a big challenge for that. The other courses, Brookline maybe, St. Andrews is dead flat.

"I'd be surprised, having watched him in the father and son (PNC Championship), and how much better his golf was than what we thought it was going to be. I’ll be really surprised if we don’t see him in some of the major championships this year."

As the former Ryder Cup captain says, the US Open and The Open Championship are two possibilities of participation where the terrain wouldn't be too strenuous for Woods to walk over the course of four rounds.

The Irishman recently completed the first series of Golf's Greatest Holes alongside Chris Hollins. The pair visited some of the best courses and holes in McGinley's home country of Ireland.

They visited courses such as Royal County Down, Adare Manor, Royal Portrush and many more. The show will land on NBC GolfPass on March 8.

Next Page: WATCH: Golfer clatters ball off a tree and into someone's car!