India's Shubhankar Sharma hit the front on day two of the Magical Kenya Open as one pro played this audacious shot. 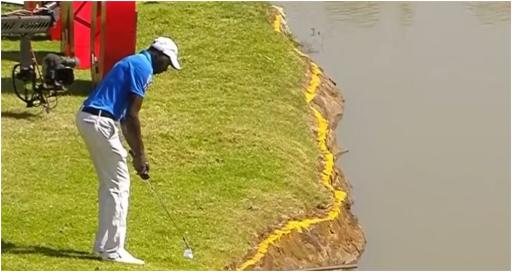 India's Shubhankar Sharma hit the front on day two of the Magical Kenya Open on the DP World Tour.

The 25-year-old consolodated on his opening 6-under 65 at Muthaiga Golf Course with a second round 67 to lead by one.

Sharma hasn't won the DP World Tour since the Maybank Championship in 2018. That event was on the Asian Tour and co-sanctioned.

Day one was flawless from the Indian with six birdies sunk. Here, on day two, he had four birdies, two bogeys and an eagle.

The impressive Japanese youngster - Masahiro Kawamutra - has gone 67-66 to sit just one shot behind.

Scotland's Ewen Ferguson, South Africa's Thriston Lawrence and Sweden's Jesper Svensson are also in the mix and make up the top-10.

There is a pretty cool story also developing. The teenage amateur, Njoroge Kibugu, finished birdie-eagle in round two to put himself into weekend contention.

He is in fact a member here and he appeared to let all that local knowledge count. This is just his second DP World Tour appearance.

"I feel the support. It's everywhere and amazing".

The shot of the day

The shot of the day and the week will inevitably to Kenya's Jasta Maoya Asena.

He was faced with the prospect of possibly falling into the water had he taken this shot on righty.

Therefore, he opted to go lefty. This was probably as difficult as it gets. On a downslope, over water.

Take a bow, sir. If only us mere mortals were so brave.