We were treated to some fantastic shotmaking at the Slync.io Dubai Desert Classic from some of the world's best players, but which one was the best? 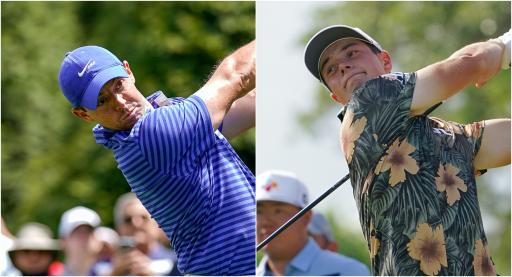 Viktor Hovland was the star of the show once again at the Slync.io Dubai Desert Classic, flying the flag for Norwegian and European golf.

It is Hovland's third win in his last five appearances on all tours. He is now ranked third in the world and we aren't even out of January yet.

Hovland produced some fantastic shotmaking down the stretch at the Emirates Golf Club, but there were many brilliant moments from the week in the Middle East.

RELATED: VIKTOR HOVLAND: WHAT'S IN THE BAG OF THE NEW WORLD NO.3?

Here are the top five shots from the Slync.io Dubai Desert Classic, starting with a legendary veteran of the DP World Tour.

It may not have been the week Colin Montgomerie wanted, as he missed the cut with rounds of 80 and 72, but he had a memorable moment on the par-5 10th hole in the second round.

The 58-year-old was in the greenside bunker after two shots and the pin was tucked in tight. Monty landed his ball in the fringe perfectly and it rolled in for a great hole-out eagle.

Rory McIlroy birdies from the sand

#4 - Super Rory recovery from the Desert

After a bogey on his first hole of the final round, Rory McIlroy needed to turn things around. On the 6th hole, he hit his drive right into the desert and he had a tree in his way.

He hit a low hook which finished about 18 feet from the hole. The Northern Irishman rolled in the birdie putt to move within one shot of the lead.

The fairytale continues for @blandy73!

Richard Bland surged into a share of the lead on the final day in Dubai. He made birdies on holes 9, 10 and 11 to move into contention.

With Hovland in the clubhouse on 12-under-par, Bland had a difficult putt down the hill on the 18th green for a birdie to share the lead. He rolled it in and fist-pumped in what was a fantastic moment for the 48-year-old.

What a drive, what a putt!

Viktor Hovland three-putted the 15th hole on Sunday to fall back to 8-under-par and all seemed lost. He clawed a shot back at the 16th hole and he took the driver out on the driveable par-4 17th hole.

His tee shot was perfect and finished about 30 feet from the hole. He incredibly made the putt which was the only eagle made on the 17th hole all week.

Ryan Fox finished tied 26th at the Slync.io Dubai Desert Classic, nothing to write home about, but his best moment came on the par-3 4th hole in the third round.

The big-hitting boy from New Zealand hit the perfect shot on the 191-yard hole which perfectly trickled into the bottom of the cup.