Jon Rahm last appeared at the DP World Tour's flagship event in 2019 and since then, he has become a US Open champion and a seven-time winner on the PGA Tour. 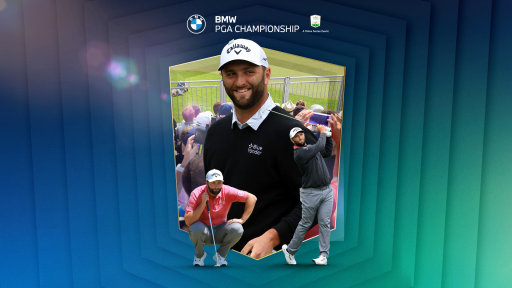 World No.2 Jon Rahm will return to the BMW PGA Championship for the first time since 2019, and the Spaniard will want to go one better than his runner-up finish three years ago when he plays in the fourth Rolex Series event of the season.

The 27-year-old went toe-to-toe with Danny Willett over Wentworth’s famous West Course with the Englishman emerging victorious, but Rahm won many new fans amongst the huge crowds that gathered to watch their titanic weekend battle.

Rahm has since continued his remarkable career, reaching World No.1 for the first time in July 2020 before becoming the first Spaniard to win the US Open in 2021.

Last month, the Spaniard earned his seventh PGA Tour title at the Mexico Open and he finished tied 12th in his US Open title defence, as Matt Fitzpatrick earned his maiden major title at The Country Club in Brookline.

It was announced last week that Fitzpatrick will make his first appearance on English soil as a major champion at Wentworth, and he and Rahm will join the reigning BMW PGA Champion Billy Horschel, as well as 2020 winner Tyrrell Hatton and Willett.

Every year, the BMW PGA Championship attracts more than 100,000 spectators for what is one of the highlights of the sporting summer with its mix of world-class golf, live entertainment from internationally-renowned music acts and an unrivalled atmosphere in the vibrant Spectator Village.

"I cannot wait to return to the BMW PGA Championship. It really is an incredible event - a huge attendance of knowledgeable and supportive fans, a world-class golf course and it’s a historic championship," said Rahm.

"I have always had a great time when playing at Wentworth and obviously I came close the last time I was there. I’m aiming to bring my best game in September and challenge for the title once again."

The action begins with the Tuesday practice day before the star-studded Celebrity Pro-Am brings together global celebrity superstars and some of golf’s most famous players. The BMW PGA Championship will tee off on Thursday, September 8 and run through to Sunday, September 11.