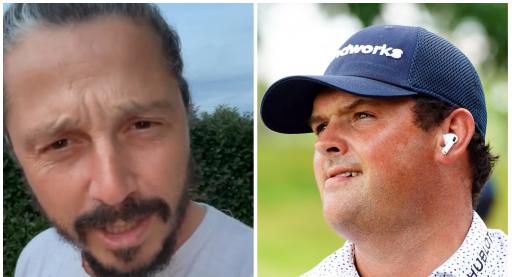 Lorenzo-Vera has been a strong advocate for his peers remaining on the DP World Tour and PGA Tour instead of making the move over to the controversial Saudi-backed LIV Golf Invitational Series.

LIV Golf rebel Reed, or whoever runs his social media account these days, had clearly heard enough from him and so he has now been blocked.

Lorenzo-Vera accepted the block, and then called him a "cheat".

Without going into potential details behind such a claim, there is a good chance Lorenzo-Vera was referring to a time when Reed did this in the bunker at the Hero World Challenge in 2019.

That particular incident sent the golf world up in arms.

Reed denied any wrongdoing, but many others thought he knew exactly what he was doing in the sand.

Oh, and then there was this incident, too.

Don't worry Mike, we have also been blocked by Patrick, too... but let's just say we are not losing much sleep over it.

Related: After plenty of rumour, Patrick Reed has officially split with PXG after just six months!

Lorenzo-Vera came down hard on a number of fellow DP World Tour players initially interested in a new Saudi golf league back in February this year.

The Frenchman posted this emotional video about it all - WATCH HERE

"The European Tour, the PGA Tour has been here for us and we can thank them," he said four months ago. "I think to go away from them just for money it feels a bit strange, and THAT money feels even more strange."

A couple of months later, Lorenzo-Vera then ripped into the players that had eventually made the move to a new LIV Golf Invitational Series backed by the Saudi Arabian Public Investment Fund and led by two-time major champion Greg Norman.

Here's what he had to say about his peers moving over to LIV Golf back in May.