Reigning US PGA champion Justin Thomas admitted beating one of the LIV Golf rebels to win the Genesis Scottish Open "might be a little better." 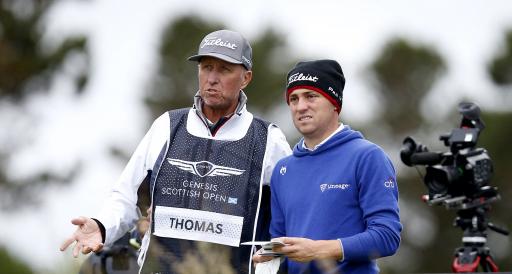 Speaking to the media at The Renaissance Club, Thomas kept up his mantle of being one of the PGA Tour's loudest advocates as he prepares to tee it up against four players whose DP World Tour suspensions have been "stayed."

LIV Golf players Ian Poulter, Adrian Otaegui, Justin Harding and Branden Grace have all been added to the field this week as we are yet to hear the outcome of their appeals.

DP World Tour players were initially banned from playing this week and at the Barbasol and Barracuda Championships. It could certainly create an intriguing dynamic just a week before The Open.

"If I know all four of them, then it will be fine. It will be easy. But even if I don’t, I don’t necessarily think we’re going to be having any like gamesmanship or needling each other out there," Thomas said, as reported by Phil Casey.

"At the end of the day, they are here for the same reason we are and that’s just trying to play well and give yourself an opportunity to win the Scottish Open.

"If it so happens that it comes to that point and you have an opportunity to beat one of them to win the tournament, it might be a little better, but I’m sure they would say the same thing.

"I’ll be the first to say I’ve gotten wrapped up emotionally from time to time, and I’m allowed to do that. I’m passionate about it and I feel a certain way.

"But at the end of the day, myself and others, first and foremost, need to focus on playing good golf because that’s the number one priority."

Thomas, 29, has previously spoken of his sadness at the many big names who have defected to the breakaway Saudi-backed series which has dished out $50 million in prize money over two events.

Grace, one of the players to recover his entry in Scotland this week, won $4.375 million in Portland last week. Thomas earned $2.7 million for winning his second major title at Southern Hills in May.