Rory McIlroy thrilled the Irish crowds at Adare Manor as he finished five shots behind Xander Schauffele, while the damage was done for Tiger Woods after round one. 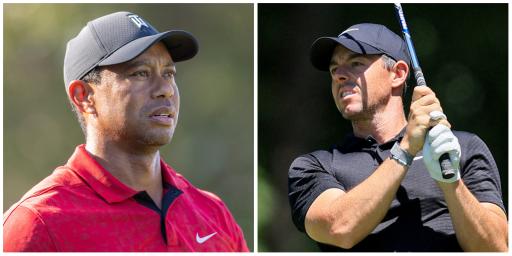 Rory McIlroy and Tiger Woods entertained the fans at Adare Manor this week during the JP McManus Pro-Am, appearing in a star-studded field of major champions and golf legends.

The 36-hole professional tournament belonged to Xander Schauffele. He carded rounds of 64 and 70 to finish one shot ahead of Sam Burns on 10-under-par.

McIlroy may not have been able to contend for the charity event title, but instead, he scored 71 and 68 to finish on 5-under-par. He was tied sixth with popular American Rickie Fowler.

On Monday, McIlroy and Woods spent some time together on the driving range in Limerick where the 15-time major champion let the home favourite test his driver.

Woods admittedly wasn't at his best over the two days. Despite appearing to enjoy the crowd and the laid-back nature of the event, he carded 77 and 74 to finish tied with Jason Kokrak in 39th place.

Related: Tiger Woods: "Window to play championship golf not as long as I'd like"

"Too much loft for you?"

The 46-year-old said the window to play championship golf isn't as long as he'd like. He revealed he must continue to look after his body after his experience at the US PGA Championship at Southern Hills, where he withdrew before the final round after aggravating his injured right leg.

"I don't know. I really don't. If you asked me last year whether I would play golf again, all of my surgeons would have said no. But here I am playing in two major championships this year," Woods said in Ireland.

"Now if you say play at a championship level, well, that window is definitely not as long as I would like it to be.

Much like Justin Thomas, Jordan Spieth and Scottie Scheffler did ahead of the Pro-Am, Woods intends to prepare for The Open Championship by playing some links golf in Ireland.

His desire to play in The 150th Open Championship is unsurprising considering two of his three Claret Jugs have been won at St Andrews, the home of golf.