Ian Poulter and three other players were reinstated in the Genesis Scottish Open field this week after their suspension appeals were stayed. 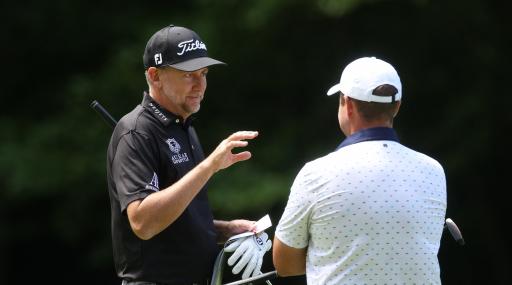 LIV Golf rebel Ian Poulter believes the right decision was made to be reinstated in the Genesis Scottish Open field, following his appeal to the DP World Tour on his suspension.

Poulter told the press that he has spoken to Rory McIlroy and Thomas Bjorn about his decision to join the Saudi-backed series, maintaining he hasn't lost his former Ryder Cup partners as friends.

The DP World Tour issued suspensions to the LIV Golf rebels, preventing them from playing this week, the Barbasol Championship and the Barracuda Championship.

Poulter, Branden Grace, Adrian Otaegui and Justin Harding have all had their appeals "stayed" until a determination has been made by the Appeal Panel. DP World Tour boss Keith Pelley expressed his disappointment at this decision in a recent statement.

"We followed the procedure that was laid out in front by the tour for an appeal process and we've obviously won that appeal. I feel like it was the right decision and I'm looking forward to the week," Poulter said.

"The locker room is people that I play against week in and week out and if they take exception to it that's up to those guys. I haven't had a problem with any of the players.

"I've seen Rory (McIlroy) this week and I've had a chat, I've seen Thomas (Bjorn) and we have a difference of opinion but we're still friends, which it's nice when you've played golf with these players for a very long time.

"It is strictly a business decision, not a personal decision that has to get in the way of friendships and I class pretty much everyone out here on tour as a friend."

At the inaugural Saudi-backed event at Centurion Golf Club, the 46-year-old felt he'd been wronged by his PGA Tour suspension and said he would consider legal action.