Niall Horan will tee it up in County Antrim in August at the ISPS Handa World Invitational presented by Modest! Golf Management. 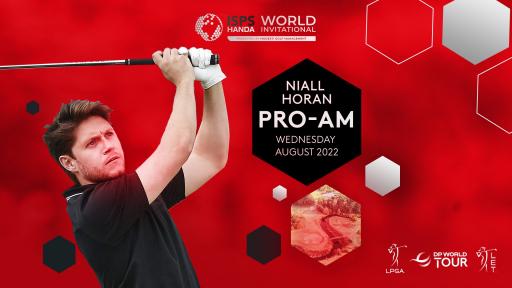 Niall Horan, who rose to fame as a member of One Direction, will return to County Antrim in August to take part in the Pro-Am at the ISPS Handa World Invitational presented by Modest! Golf Management.

Horan will play on Wednesday, August 10 for the curtain-raiser ahead of the innovative ISPS Handa World Invitational.

This event brings together some of the best players in the men’s and women’s games, with a DP World Tour tournament and a co-sanctioned LPGA Tour and Ladies European Tour event played over two courses from August 11-14.

The Irishman founded Modest! Golf Management, the presenting sponsor of the tournament which will be played across Galgorm Castle and Massereene Golf Clubs.

The tournament will also host the G4D Tour, which brings together the world’s best golfers with disabilities. Last year, Modest! Golf player Brendan Lawlor secured an emotional victory at Galgorm to move to the top of the World Ranking for Golfers with Disability (WR4GD) for the first time.

"It’s no secret that I love golf and all of us at Modest! are proud to have the opportunity to work with the DP World Tour, the LPGA Tour and the Ladies European Tour along with title sponsor ISPS HANDA once again for this event.

"It was great fun last year and it was great to see men and women playing on the golf course at the same time and for equal prize money. Pro-Ams are always a great family day out and I’m excited to see the crowds come out in support of the tournament."

Leona Maguire, Ireland’s first-ever winner on the LPGA Tour, will play in the women’s competition with Northern Irishwoman Stephanie Meadow and Germany's Olivia Cowen. Meadow won the 2019 edition of this event.

In the men’s competition, DP World Tour winners Guido Migliozzi and Ewen Ferguson are set to play alongside Daniel Gavins, who will be defending the title he won last year after carding a 7-under par final round 65.

"I’m excited to tee it up in Northern Ireland again," said Migliozzi. "One of my first appearances as a professional was actually at Galgorm Castle on the European Challenge Tour, so it will be nice to go back and reflect on how far I’ve come as a player in the last six years."

Next Page: Why Xander Schauffle has turned down an "obnoxious offer" from LIV Golf...