James Hart du Preez surged ahead on day one of The Steyn City Championship on the DP World Tour. 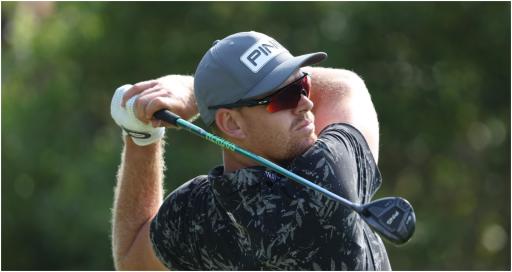 He's a 6ft 10ins bomber who absolutely sends it. He recently made his PGA Tour debut and he has taken the 18-hole lead on the last event of the South African swing on the DP World Tour.

The Steyn City Championship is being played at The Club at Steyn City in Johannesburg.

At 7,716 yards playing at a par of 72, it sounds like a course suited to the bigger hitters. And Hart du Preez is definitely one of those.

The South African, 26, who reportedly weighs more than 260lbs, carries his driver on average 345 yards.

His ball speeds rival those who participate in long drive, hitting numbers as high as 210mph.

On the Sunshine Tour last season, he averaged 373 yards off the tee. He made his PGA Tour debut at The American Express in the middle of January, but unfortunately he could not get anything going.

Hart du Preez held his first ever 18-hole lead on the DP World Tour with a stunning 9-under par 63.

That included seven birdies and two eagles.  Unfortunately he dropped shots at the 8th and 9th holes.

The Steyn City Championship is the last of three consecutive DP World Tour events to take place in Africa in March.

The action then headed south from Kenya to Pecanwood Golf and Country Club, where Pablo Larrazábal came through a three-man play-off with a birdie on the second extra hole to win his sixth tour event and his second in South Africa.