Justin Thomas "BLACKED OUT" after bogey-free round at Players Championship

Justin Thomas and Harry Higgs shared a joke on Twitter after the 2017 PGA champion shot 3-under-par in treacherous winds at TPC Sawgrass. 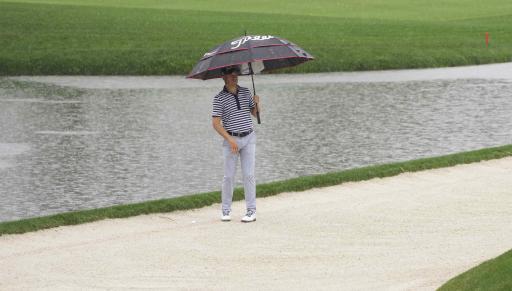 Justin Thomas joked to Harry Higgs that he "blacked out" after firing an incredible bogey-free round at The Players Championship.

Thomas played alongside Rory McIlroy and Collin Morikawa as they finally finished their first round and played their second-round too.

The wind was absolutely brutal at TPC Sawgrass, but Thomas weathered the storm to fire a 3-under-par 69 to gain many shots on the field.

The 2017 PGA champion shot one of only two bogey-free rounds on the day. Bubba Watson went one better and shot a 4-under-par 68 without a blemish.

Thomas and Watson both finished on 3-under-par for the tournament heading into Sunday. Players teed off at 8.15 am on Sunday to get the championship back underway.

I have no idea. I blacked out

Thomas, the defending champion of The Players, revealed how exhausted he was after his round on Twitter, posting a clip of a man falling to the floor.

PGA Tour funnyman Higgs replied to Thomas's tweet: "JT, who did you pay off this morning to not make a bogey?? There are no words to describe how insanely good that is."

Higgs was correct. Both Thomas and Watson had played incredible rounds. Higgs himself shot rounds of 76 and 77 to finish on 9-over-par.

"I have no idea. I blacked out," Thomas replied to his fellow American. When Thomas finished his second round, he was three shots behind leaders Tommy Fleetwood and Tom Hoge on 6-under-par.

No player has ever won The Players Championship in back to back years, but the World No.8 is in good shape for what will be a Monday finish in Florida.