Tyrrell Hatton let his temper boil over during the second round of the Abu Dhabi HSBC Championship when he failed to step off he ball despite there being a gust of wind. 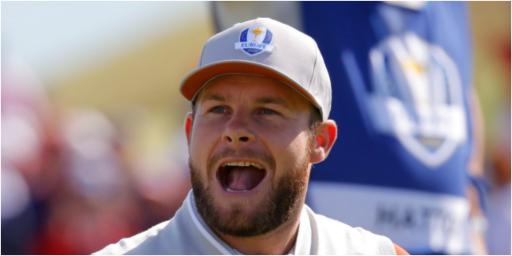 Tyrrell Hatton let his frustration boil over during the second round of the Abu Dhabi HSBC Championship.

Hatton was stood over the ball and caught a gust of wind and should have backed off the ball on the DP World Tour.

He didn't, and his ball went miles left and sailing into the thick stuff.

There, Hatton let his feelings known and even the commentary team had to apologise for his bad language.

He was only 188 yards from the pin and knew straight away that he should have paused.

You’ve got to love Tyrrell Hatton, so relatable #Golf pic.twitter.com/hBITzsT3c7

Related: Tyrrell Hatton throws his clubs on the European Tour

Tell us how you really feel, Tyrrell.

"Apologies for the language there on more than one occasion from Tyrrell," says on course commentator Andrew Coltart.

"He got a gust of wind on the back swing and rather than stepping away from it he decided to go with the shot."

Hatton signed for a 5-over 77 on the par-72 layout at Yas Links, a new course being played for this Rolex Series event.

Overall, he found himself six shots behind the lead on a day where the conditions were simply awful.

Only a handful of players managed to finish below par.

This is not the first time Hatton has lost his temper. He has a history of losing it a little bit and letting the F bombs fly.

Hatton memorably starred as a spoof version of himself for the European Tour's video involving angry golfers.

Perhaps he needs to get back into another session?

Next page: Phil Mickelsons smashes driver...out of a fairway bunker