The Japan Golf Tour Organization appears to have snubbed LIV Golf by announcing a partnership with the PGA and DP World Tour. 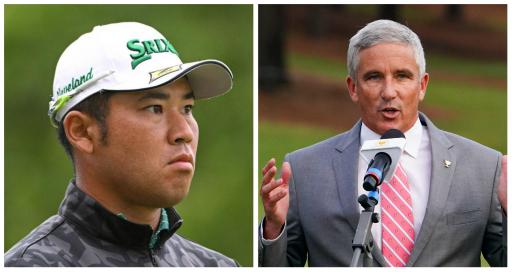 The Japan Golf Tour Organization [JGTO] appears to have picked a lane amid the PGA and DP World Tour's battle with LIV Golf.

As part of a "landmark partnership", a new "formal pathway" will see the top three players from the JGTO order of merit gain membership on the DP World Tour beginning with the 2022/2023 season.

As part of a joint press release, the European-based circuit claims the alliance has been created to enhance the "existing pathway system" as the top 10 players in the DP World Tour Race to Dubai Rankings in 2024 will earn membership on the US circuit.

The news is significant because some would have thought the JGTO might have sided with LIV Golf considering a number of Japanese players have teed it up in their inaugural $255m season.

It was also previously reported that the PGA Tour had allegedly threatened Japan Golf Tour players with bans from the ZOZO Championship and Korn Ferry Tour school if they teed it up in LIV events.

Japanese players were curiously absent from LIV's stop in Boston.

A statement from the JGTO later confirmed the tour felt it would be beneficial to remain neutral over LIV Golf.

"The Japan Golf Tour Organization has produced many incredibly talented players over the years, and we are delighted to establish this formal pathway as part of golf’s meritocratic system, defining clear routes for players from the other international tours to earn status on the DP World Tour and potentially go on to play on the PGA Tour.
"There are players from 34 different countries exempt on the DP World Tour in 2023 and, alongside our first tournament in Japan next April, today’s announcement further underlines our position as golf's global tour."

Related: LIV lawyers now have Pelley in their cross hairs

The new pathway also includes access to the DP World Tour Q-School for leading players not exempt otherwise. The JGTO will also work with both tours on business areas including strategic development and commercial growth.

One of these areas is the commitment of the ISPS Handa Championship which will make its debut on the DP World Tour schedule in 2023 at PGM Ishioka GC in Omitama, Japan.

"Japan has a long, storied history of producing world-class golf talent that deserves the opportunity to compete on the game’s highest stage, and today’s announcement is recognition of that.
"Over the past 30 years, 25 players have claimed at least one victory on both the PGA Tour and Japan Golf Tour, including current Japan Golf Tour Chairman Isao Aoki, who in 1983 became the first Japanese-born player to win on the PGA Tour when he holed out for eagle on the 72nd hole to win the Sony Open in Hawaii.
"His legacy continues today with eight-time JGTO winner Hideki Matsuyama and will now endure for years to come under this new pathway."

"We are proud of the rich tradition the Japan men’s golf tour has established over the last 40 years, and this development is the next step in the journey of our organisation.
"Our players have made significant contributions to the global game since our tour’s inception in 1973, and we are excited that the next class of Japanese players will soon be able to reap the rewards that their predecessors helped create for them.
"We are looking forward to working with both the PGA Tour and DP World Tour on the next era of professional golf development in Japan."