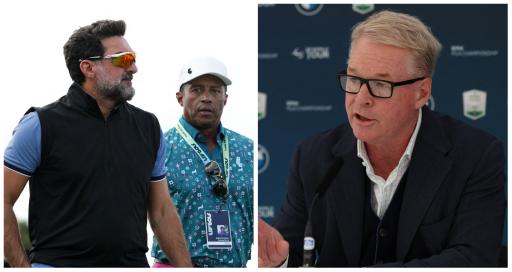 LIV Golf now have DP World Tour chief executive Keith Pelley in their cross hairs as attorneys representing the breakaway tour have filed a motion to depose the boss of the European-based circuit.

Per a report by Rex Hoggard of Golf Channel on 4 December, it has emerged that an extension of the antitrust lawsuit was filed in the middle of November in the US District Court for the Middle District of Florida in Jacksonville.

This is separate to the litigation that was filed in August after the PGA Tour suspended players for teeing it up in LIV Golf events.

As many as 11 players were involved in that litigation that saw Phil Mickelson as the plaintiff in chief.

Mickelson later dropped out because LIV Golf added themselves as a plaintiff.

Now only three players remain in the original lawsuit. They are Bryson DeChambeau, Matt Jones and Peter Uihlein.

DeChambeau claims the only reason he remains involved in the litigation is because the PGA Tour is withholding half of his money from the inaugural Player Impact Program.

The players who were part of the antitrust lawsuit that subsequently dropped out include:

Now LIV Golf want to put Pelley under the spotlight and have him answer as many as 35 questions under oath as part of the discovery process window.

The most recent claim states that Pelley is part of an "unlawful conspiratorial agreement".

Hoggard's report states that Pelley's attorneys argued that because the DP World Tour's HQ is in England - some 4,000 miles away from Jacksonville - means he is exempt from having to comply with the subpoena.

"The mere presence of one of its directors [Monahan] near Jacksonville does not somehow transform the European Tour’s overseas business operations as physically transacted within 100 miles of the place of compliance."

LIV Golf attorneys reportedly replied to the motion 29 November by stating that Pelley's attorneys' arguments were:

"Artfully worded half-truths, omissions of critical facts, and a misleading picture of the [DP World Tour's] extensive contracts with this district."

The court documents also reference the fact that Pelley is reportedly due to meet with other golf leaders at Pelican Golf Club in a few days' time before The Match involving Tiger Woods, Rory McIlroy, Justin Thomas and Jordan Spieth.

The Telegraph's Jamie Corrigan previously reported a "war council" meeting was scheduled whereby the chief executives of at least three major governing bodies were going to discuss how to proceed with LIV going forward.

This news regarding Pelley comes as the PGA Tour are attempting to do something similar with LIV chief Yasir Al-Rumayyan.

Court documents also allege that Al-Rumayyan is the real chief executive of LIV and not Greg Norman.