The Japan Golf Tour have released a statement about their stance on the LIV Golf Invitational Series, outlining their current position. 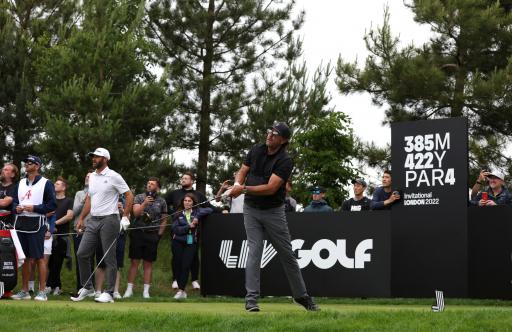 The Japan Golf Tour [JGTO] have released a statement about their stance on the LIV Golf Invitational Series, outlining they believe it would be "beneficial" to remain neutral at this moment in time.

Greg Norman, the LIV Golf Tour chief executive, has previously stated his desire for golf's governing bodies - particularly when it comes to the majors - to "remain Switzerland".

Despite the uncertainty in professional golf right now and how it will look in the future, it's clear where the allegiances of some tours are.

The DP World Tour is with the PGA Tour. They have strengthened their "strategic alliance" in the wake of LIV and have handed out fines and suspensions.

The Asian Tour? That's firmly with Norman's LIV. Even before a tee shot was struck in LIV's first event, they entered into a strategic partnership and announced the International Series. They have committed to investing $300m into the Asian Tour over the next 10 years.

But the JGTO, it appears, is not sure what stance to take.

Scroll down to read their statement.

Here is the statement they released, via Handicap54:

"Today, I would like to give you an update on the recent development in relation to the confusion resulting from the activities of LIV. First, JGTO's current position is that it would be beneficial (for tour members and for the tour itself) if we maintained a neutral position on this matter and stayed away from any political conflict.

"Meanwhile, Mr. Greg Norman [of LIV Golf] contacted JGTO and asked us to take the same position as them, regarding the eligibility of Japan Golf Tour members for the ZOZO Championship and to protect the PGA Tour. As I have already told you, the conclusion made by the PGA Tour for this year's ZOZO Championship was reached after negotiations that took a few months, and we told Mr. Norman that we would not find it appropriate to reopen the negotiations at this time.

"In addition, the PGA Tour and the DP World Tour [partner] sent a letter to JGTO, outlining their desire to form a visible alliance with JGTO. We will be discussing the details of their intention going forward, believing that a critical factor in this discussion would be to try to establish a path to the DP World Tour, the Korn Ferry Tour and the PGA Tour, based on the results of the Japan Golf Tour.

"And there is one thing that we would like to be understood. Knowing how things would unfold in the future, it is not possible to enjoy the benefits of both LIV Golf and the PGA Tour at this time. If we entered into an affiliation or an amicable relationship with LIV, the ability of tour members to play on the PGA Tour and Korn Ferry Tour would be reduced. And if we enter into an alliance with the PGA Tour and the DP World Tour, there will definitely be a restriction on our members' participation in the LIV Golf Invitational.

"If one wishes to play on the LIV Golf Invitational instead of the PGA Tour, it might make sense to play primarily on the Asian Tour [LIV International Series]. Now that the Asian Tour has entered into a friendly relationship with LIV, we believe that JGTO needs to create a clear path to the PGA Tour/DP World Tour, so that professional golfers from Japan and Asia have a good range of opportunities, depending on the intention of each golfer."

"I am sure that each of you will have a different opinion on this matter and it would probably be unlikely to find a direction that would suit everyone. However, if you have any comments or remarks that you would like to make to JGTO, please do not hesitate to do so."

GolfMagic have previously written about the PGA Tour's alleged treatment of JGTO players:

The next LIV Golf event will take place over 7-9 October at Stonehill Golf Course.

Next page: PGA Tour caddie to LIV players: "Be mad at your agent!"