World No.1 and DP World Tour Race to Dubai winner Rory McIlroy won the Irish Open at The K Club six years ago and he will return to the famous venue next year. 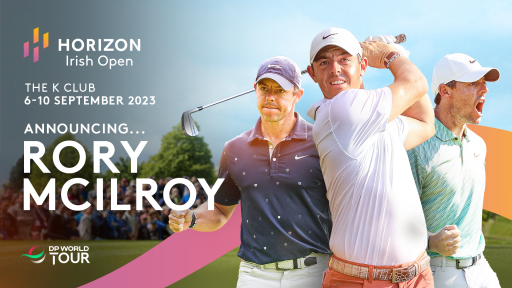 World No.1, FedEx Cup champion and DP World Tour Race to Dubai winner Rory McIlroy will compete in the Horizon Irish Open in 2023.

The four-time major champion won at this very event at The K Club in 2016 with a memorable eagle finish on the final hole to win by three shots, which is where next year's event will take place.

After winning the CJ Cup on the PGA Tour, McIlroy reached the top of the Official World Golf Rankings for the ninth time in his career, shortly after winning the FedEx Cup for a record third time.

The 33-year-old came fourth at the DP World Tour Championship which was enough to secure his fourth Race to Dubai title. We will next see him play in The Match with Tiger Woods against Jordan Spieth and Justin Thomas on December 10.

The Horizon Irish Open will take place from September 7-10 in 2023 and it will act as final preparation for the Northern Irishman who will likely lead Team Europe into battle at the Ryder Cup in Italy soon after.

Extremely proud to be the first to be World No. 1, FedEx Cup Champion and @DPWorldTour No. 1 in the same year. I truly appreciate all of your support!

"The Irish Open is a tournament that I grew up not just watching on TV but attending as a kid, seeing all my favourite players there over the years," said McIlroy.

"It’s always been such a well-supported event. I’ve had my fair share of support and great memories at that tournament and going back to The K Club, it’s where I’ve had the most success and I’m obviously excited to get back there.

"The atmosphere was electric during that final round in 2016 and I’m looking forward to seeing the fans out in force at The K Club once again."

Adrian Meronk made history at the Horizon Irish Open back in July. Not only did he win his first trophy on the DP World Tour, but he became the first Polish player to win on the circuit formerly known as the European Tour.

Since it was first played in 1927, the Irish Open has thrown up some great winners including some of Europe's greatest sons such as Seve Ballesteros, Sir Nick Faldo, Padraig Harrington, Colin Montgomerie, Jose Maria Olazabal and Jon Rahm.